Leaving Colorado and the Rocky Mountains behind, the ride is going to be different. I had plans to be out the door by 6:30 but with staying up a bit later than expected, I actually didn’t get rolling until 8:30. I had hoped to beat the heat of the day, but alas, I may get stuck with it. But alas, the sun is out!

Google Maps and the GPS differed on how to get out of town. I liked the GPS’s way better as I didn’t have to go into downtown Denver in morning traffic. Colorado 52 ran me through suburban Denver, to small farming communities, then finally out to Interstate 76. Right at 76 was a big American flag blowing in the wind. Throughout` this ride I’m having a growing respect &amp; appreciation for the flag and the country that stands behind it. So many different places, yet we come together in one reasonably cohesive union.

On the freeway, I had to laugh as I saw a car pass me with California tags packed with stuff. I was thinking that they are probably headed back home after school, but the car was traveling the wrong direction. None the less, life was good and I’m on the road again. After about 60 miles, I leave the interstate to get on less traveled US 34. There is a lot of cattle ranching in eastern Colorado and you definitely smell it on the highway. Every few miles you see a cattle corral and the stench a few hundred yards later.

Just before getting to Wray, CO I see signs for construction and a flagman. I slide to the front of the line on the shoulder to see what hazards may occur to the dismay of some of the car drivers. Nothing to major, just the crew paving the road. Some miles later though, the pavement ends (how this happens on a US highway… I dunno) and it’s a ride through the dirt for a good 7-10 miles until pavement reappears.

I pass Wray (and the gas station) to keep pressing on. As soon as I get into Nebraska the gas light starts blinking… not good. I pull into town and don’t see a fuel up. I ask the waitress if there is a gas station nearby. She says there is one in Wray. Not good. I see the Harley in the lot has its lights on. I ask who the owner is. One of the guys comes out and thanks me for letting him know that his battery was getting drained. I ask him where the nearest gas station is and he notes there is a farmer’s coop behind the restaurant. Phew… Four gallons never tasted so good.

I stop for the state line picture and one of the locals hands me a tract talking about patriotism and faith. Short, but interesting read about how faith plays a role in how this area (or at least this guy) sees our country.

I stop for lunch in a roadside park off of US-36. Another car stops as well. I’m taking pictures of the windmill that’s nearby and he asks “Why are you talking a picture of the windmill?” I proceed to tell him the story of my trip; particularly how I’m trying to soak in areas I don’t know. Other than my visiting my Aunts and work trips to Detroit, I know very little about this area. I want to give it time and smell the roses here. 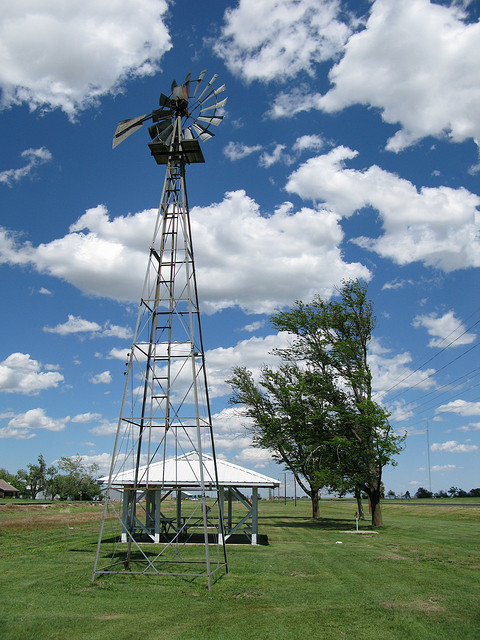 Pushing further east the wind really starts to pick up, worse so than in Colorado. I’m handling it ok, but it is definitely starting to get taxing. Most folks told me to haul through this area, but I’m taking it slow. The miles are easy and it’s so different than what I’m used to. You can tell the continued agricultural stronghold that this area has, much like the valley at home. Tractor dealers are more common than car dealers.

Most of this part of the ride is mental. It’s 1000 miles of nearly straight riding.

I’ve been listening to Andy Stanley and motorcyclistpodcast.com to keep me going. I’ve also found two roadside attractions to try to break this section up: The geographic center of the US as well as the world’s largest ball of twine. Both were cool, but underwhelming in the same breath. I’d heard of each way back as a kid, but never figured I’d go there. Now travel leads me there. Guinness was right; there is a whole lot of twine in that ball.

As I’m getting into Salina the sun is setting and I’m enjoying the sunset. 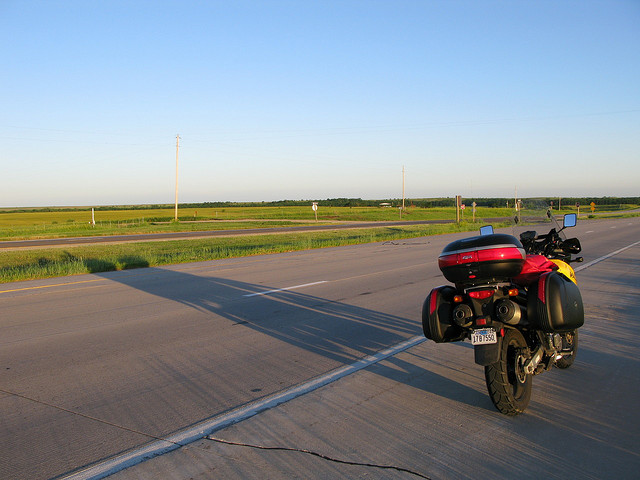 The road is curving behind me in my rearview with the sunset closing the day. If I could have gotten a picture while riding… oh that would have been so good. I like the collection of rear view pictures I have. They depict different things all along the way. When I stopped to check the sunset, the Kansas Highway Patrol checks in on me to see if I’m broken down. He tells me that my license plate cover is covering the state logo. I turn around and point out that the “CAL” on the plate is for California. I thought it was pretty obvious, but maybe Kansas plates are different. He runs my license, nothing is wrong with me, so I’m free to head into town for the evening.

Tonight looks like it might be a good night to camp. Then the mosquitoes set in. Motel 6 seems to fit the bill, so I’m calling it a night here.