The rain and snow never really materialized over the Kings Canyon area so I was in luck. The weather was good and the loud as all get out stream was still rolling in the morning!

Normally I just take 180 out to 99 to 152 to 101. CA-180 is a nice ride down to Sanger from the park, but I was growing tired of it. Plus I didn’t have to be back for a 3pm meeting at work so I figured I’d do something new. I’d had heard stories over the years about CA-245 and how twisty it was so I figured I’d head that way out towards Visalia.

The ride up the Canyon was awesome. Clear skies and open roads!

A bit higher up you can see the canyon deep in the center of the photo:

Being October, the park was closing down fast. Lots of bagged signs around.

I’d been hoping to get a nice picture of the General Grant Tree. It is too large to fit in the frame of a standard digital camera so I was hoping to sew a few pictures together and do a vertical panoramic image. Upon arrival to the grove, there were quite a few people there given an off Tuesday in October. I’m trying to find the right time of year and the right time of day to have the sun right behind the tree. This time (12ish) the sun was a little too far to the south. I’m thinking I’ll try mid June in the afteroon for the next photo. That being said, it’s still a beautiful tree and the photos came out pretty well. 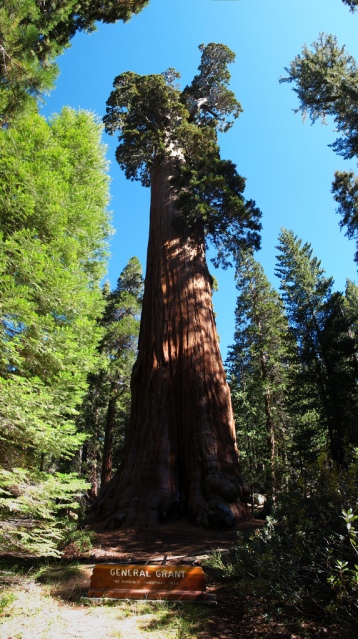 And some equally pretty trees in the parking lot:

After leaving the park I quickly turned on 245. 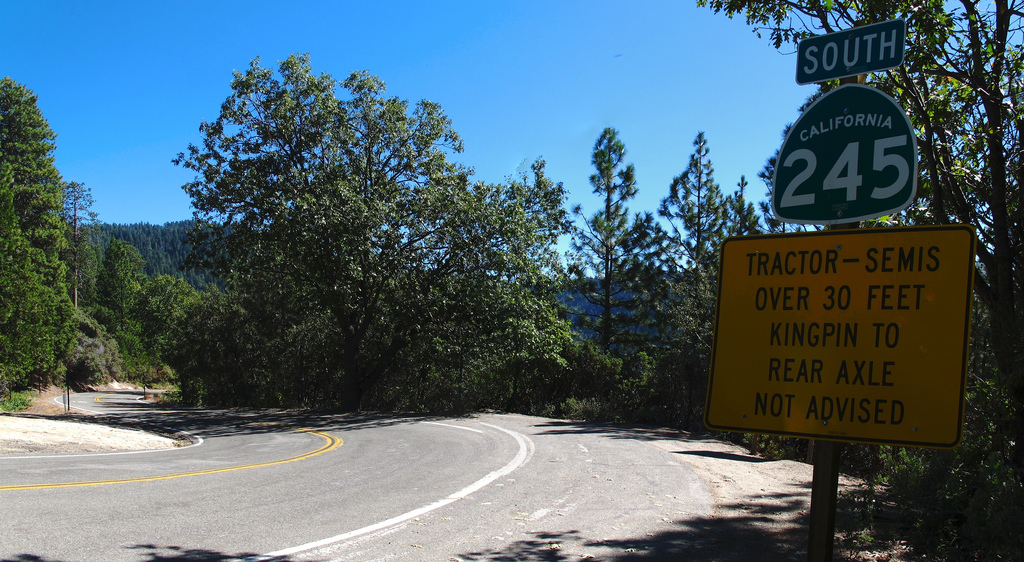 What a goat trail! 180 has some nice twists to it and very much a high speed predictable feel. CA-245 was the total opposite. The road was tight, turns were very much technical, and it was a pretty slow going ride. It is a great run, but I had a bit of get-there-itis that I think was sapping my enjoyment of the road. If going to the park from the bay area, go up 245 and return on 180.

The ride across the valley was eh, pretty blah. I made my way back to CA-99 on farm roads to CA-180. I was rolling to get home so lunch was a quick border run (ala Taco Bell). The new sauces (particularly the brown one) are really good actually.!

After 180 ended it was back to some more farm roads. I was getting good at riding off the radar. After crossing Interstate 5, the non descript farm roads turned into Little Panoche Road. I was expecting a vast array of nothingness for the next 80 or so miles.

That however was very much debunked! The pavement on Little Panoche was quite good!

and there were a number of farms along the way!

I couldn’t figure out what they were measuring in the soil though.

Once on Panoche Road, the pavement quality suffered but the ride was still pretty nice out to Highway 25. While I didn’t stop, the Panoche Inn seems to be a good stopover point at the intersection of Little Panoche and Panoche Roads. From here the ride was pretty predictable, 25 to the 101, and onto the megalopolis known as the Bay Area.

As with many trips…. too many roads too little time!