This was one of those weekends I just needed to get out of town.  I’d not been on a good long road trip alone in a while and my body was telling me it was time to go.  I had run club in the morning, and realized how long I’d not been active in the group.  Ouch. After the Santa Cruz Tuneup ride my bike was filty and had been sitting too long dirty I had no other choice but git-r-done and spend the two hours scrubbing.  Long story sort, I didn’t hi the road until three.  Going the “interesting way would have taken too long and well I didn’t want to keep the party waiting in San Luis.  It was time to celebrate.

San Luis was about a three hour ride down the freeway.  Most of this section leaves something to be desired, but it’s not all bad.  After leaving Gilroy the cityfication of the highway mellows out and the road begins to have it’s hills, twists, and turns.  From Gilroy to Salinas, it’s a nice mellow romp through the coastal hills.  Once in Salinas though, even the cheerleader has to admit it sucks to about King City.  After King City things become moderately interesting again.   Rolling hills through south Monterey and north San Luis Obispo counties keep one’s mind occupied with plenty of space to contemplate life.

I got to San Luis in three hours. While motorcycling is all about taking it in, sometimes the convenience of the super slab can be good. This was one of those times. However US-101 is not all superslab. Coming north from it’s junction with Interstate 5, there are some nice parts of it: 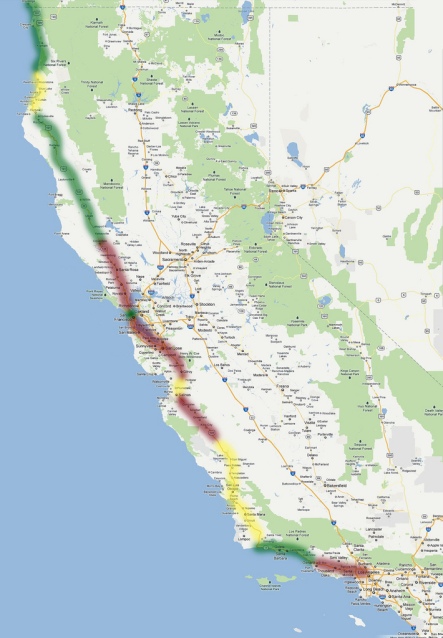 Going section by section, you can see there are some nice sections of road.  The not so nice ones ones have good alternates too.

So, after a bit of a long hiatus, we connected again.  While not the most technically challenged ride it served its place well.  I made it to the party on time and had some fun along the way.  Can’t ask for a better day.