With a day in the mountains behind me, I wondered what I should do for my last day in Sydney. I had walked around downtown quite a bit. I’d seen the Blue Mountains, but could have stayed an extra day there. Being this was high summer, I opted for the beach. Sydney has three beaches nearby it: Bondi, Manly, and the eastern suburbs. Bondi was the most traditional beach culture. Manly required a nice ferry ride. The eastern suburbs had the best scenery.

I went for Manly. A number of different people talked about the ferry, so I figured it would be the experience I’d go for. The ferry system is not unlike it is in San Francisco. The boats are large and stable, but not so large that they accommodate cars. Having been here two weeks now, I really don’t miss my car. I’ve walked and taken the train just about everywhere I’ve needed to go. It’s awesome like that. The trains were not running downtown due to track work so I walked down George St from the hotel to the ferry terminal. George St is the equivalent of Magnificent Mile in Chicago or some parts of Union Square in San Fransisco. I even caught a V-Strom in downtown!

Sydney Harbor is wonderful. Having grown up in Atlanta, it wasn’t until moving to California that I realized how much waterfront living can be. I remember kayaking around San Francisco Bay with Scott and Cara and seeing all of the buildings around the water. Padding up so close to the Bay Bridge made the structure seem so big and me feel so small.

All of those feelings came back in Sydney Harbor. 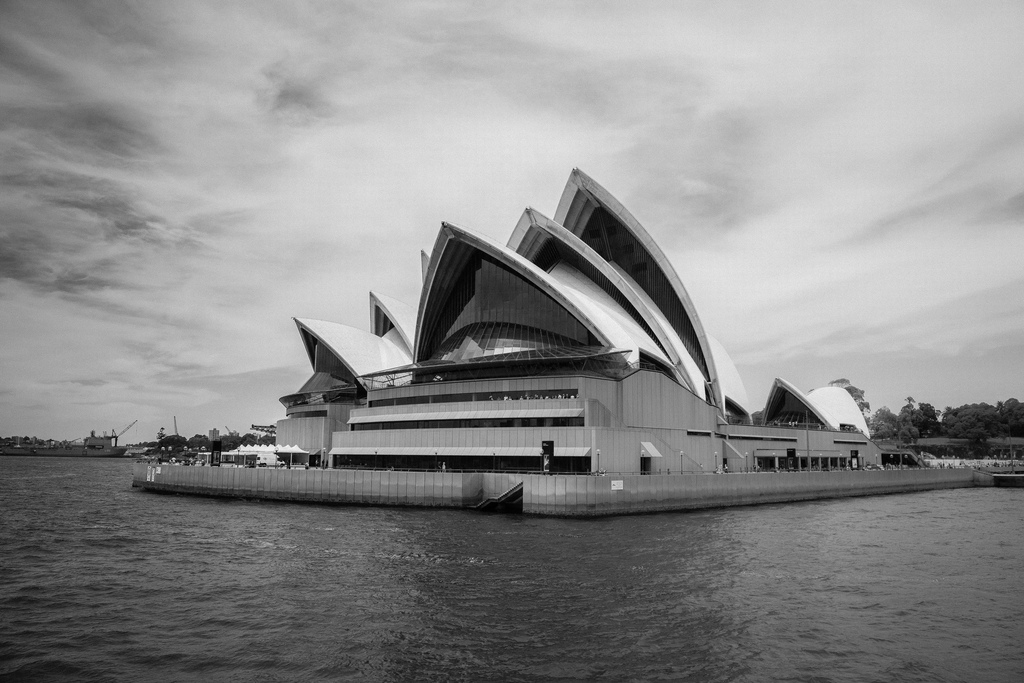 Warm Saturdays in the summer bring out the crowds. This one was no exception. The boat was just about full inside and out. 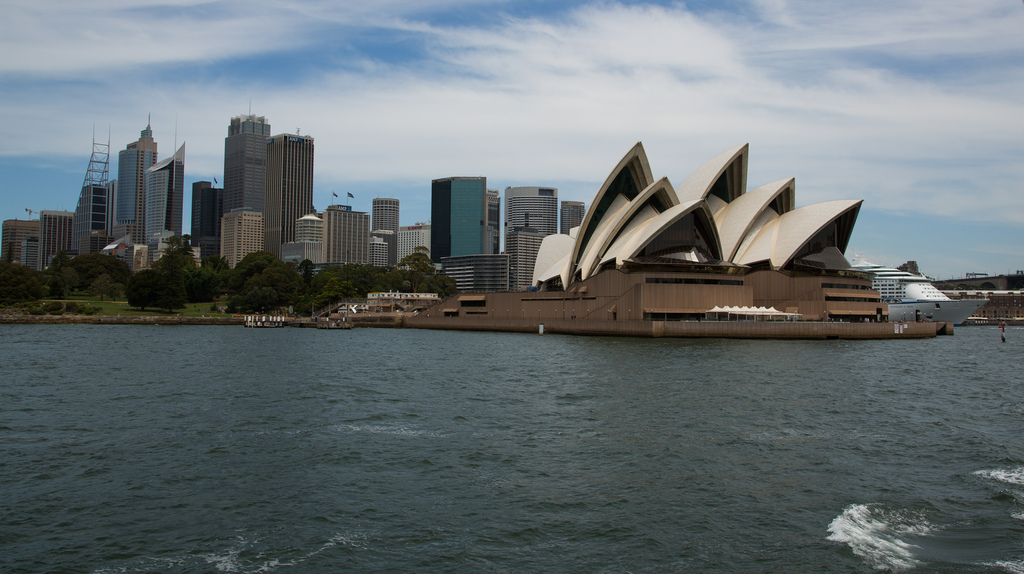 Since I just caught the boat, I didn’t get a great seat for photos. The boat ride over was great. The exit from Circular Quay (pronounced key) afforded the bridge on the left and the Opera House on the right with all of downtown behind us.

The heat was going to make today a hot one. In some respects this part of Sydney feels like a very big Sarasota. I’ve not been to Tampa, but it’s odd having such a big city near beaches you can use. 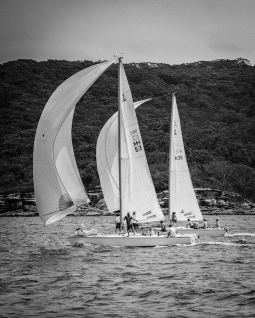 The water back home on the beach is cold year round. About 3/4ths of the way there we got the ferry equivalent of the fasten seatbelt sign asking the less adventurous to go inside. The ferry did it’s fair share of rolling, but none of us got wet.

Manly Beach is on a narrow strip of land so it is easy to walk from port on the harbor side out to the beach. A musician caught my eye next to the local church. The two didn’t seem to be affiliated though.

Between port and beach are all the shops any tourist could want. China likely sells the same set of goods to each city localized for that market. I was hoping to find a locker for my stuff so I could swim, but that never materialized. No swimming then for me.

The beach was packed.

Likely a mix between locals and tourists there were not many spots free near the water. There is less sand that separates sea to shore than I’ve seen in Florida and California, but enough that there were spots available. The ocean’s waters were cool, but in the refreshing category not the wet suit required one. The surf was solid. Way more consistent than the Gulf of Mexico, but not near what is around in California. The one big downer was the pollution warnings. After big rains the city warns not to go into the ocean due to runoff. It’s likely true in every city. Manly is just up front about it.

Australians take care of themselves, well. 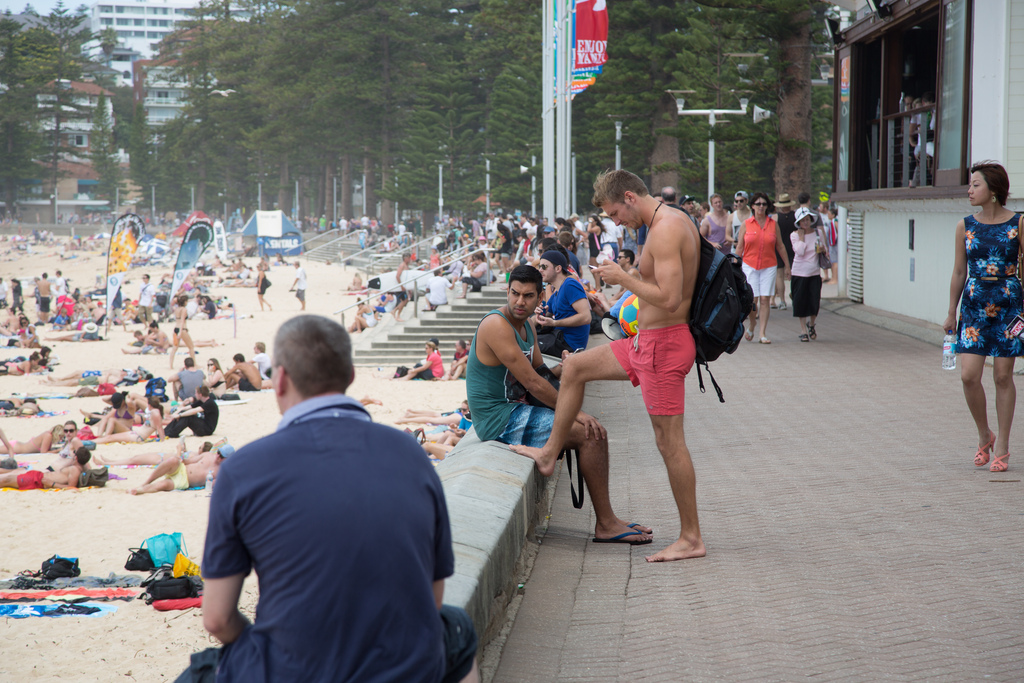 I remember moving from Atlanta to California noting how much fitter the bay area felt than back home. Sydney to San Francisco had that same jump. Being on the beach gave me recharge to start working out again. I do think part of it though is that food is much more expensive in Australia than it is in the states, by a factor of 2x. Breakfast out usually runs me $15 whereas in the States, the same food is about $8.

Manly has three major beaches in the area. Once is harbor side and the others are ocean side. Manly beach is the main attraction with it’s broad shores and easy access. Shelly Beach, however, really was the focus for the day. 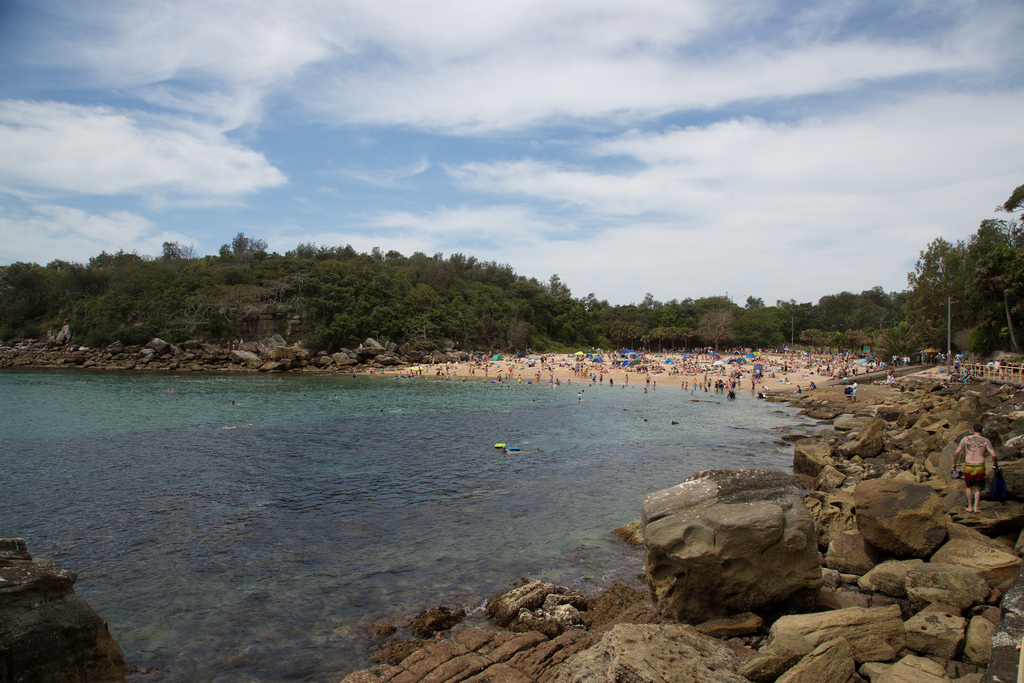 I’d read in the paper at the hotel there was a sunken motorcycle off the coast as one of the best 100 things to find in Sydney. I wasn’t able to go find it, but hike over was fun.

There were touches of California on the beaches. There were sections of rocky coast that you could climb and hike. 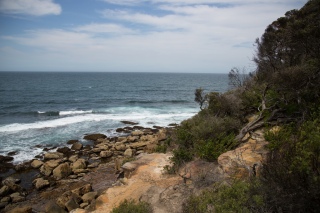 The loop hike afforded some nice view of the beach at Manly. 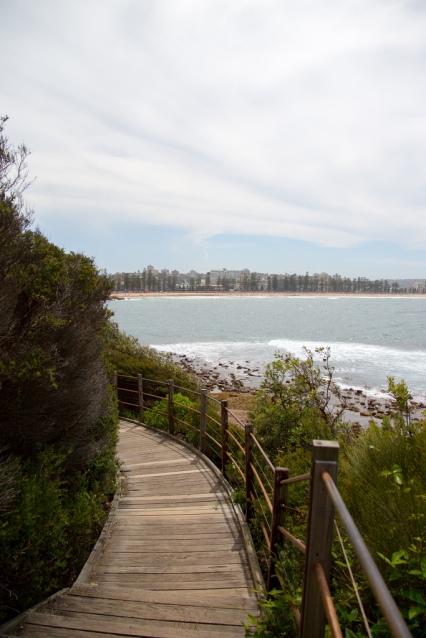 The Australian sun is strong. There is no ozone layer in Oz. I hear it’s odd to be 40 and not have some “sun spots” on you that have had to be removed. Four hours on the beach was plenty for this guy who was used to the fog. 🙂 I guess I do have a thing for benches though. This little out of the way gem took more than a few minutes of my time.

I’d been out just about every night this trip, so I decided to stay the night in and go to bed early to help fight the jet lag coming the next day.