The fourth stop on Atlassian’s Road Trip was New York City. A quick change on the agenda allowed me to attend. I hadn’t been to New York in a couple of months so was great to be able to go back in the spring rather than in the fall. Aside from that quick trip last Thanksgiving, it had been 10 years since I had been to New York. I remember the first trip to New York City on my own feeling very overwhelmed about the expense of the city before me. This trip, armed with Google maps, was much more fun to get out and see the town. Some good friends of mine had moved to the area some years ago so I was able to network and get a more local fields of the area. 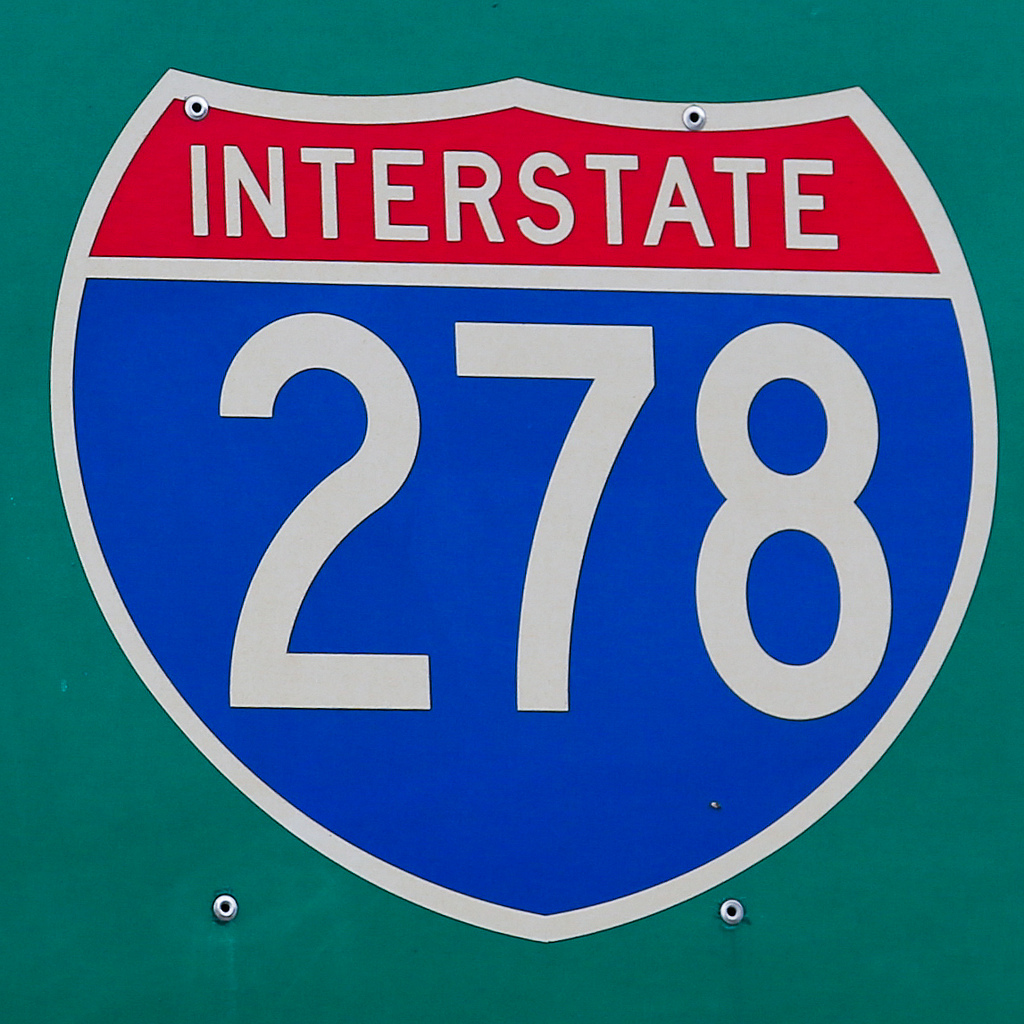 The Brooklyn Bridge impressed me with its ornate design. It was unfortunate that much of the bridge was under construction but you could see the detail in the towers of the bridge.

The “locals” were great friends of mine from the fraternity who lived in California but relocated back to the East Coast. It was great to see them and have a personal tour of the city. The least I could do was return a photograph. 🙂

Usually graffiti really disturbs me as I find it actually quite offensive. What was interesting here was that there was a good amount of graffiti that had a very positive message to it. There were a couple of quotes that actually inspired me. Who would’ve thought of that?

It was nice not being on crutches this time. Over Thanksgiving it was difficult walking at all. This time it was easy to tour the town on foot. 🙂 With a little bit of time we were over the Brooklyn Bridge  leaving Manhattan and into Brooklyn. 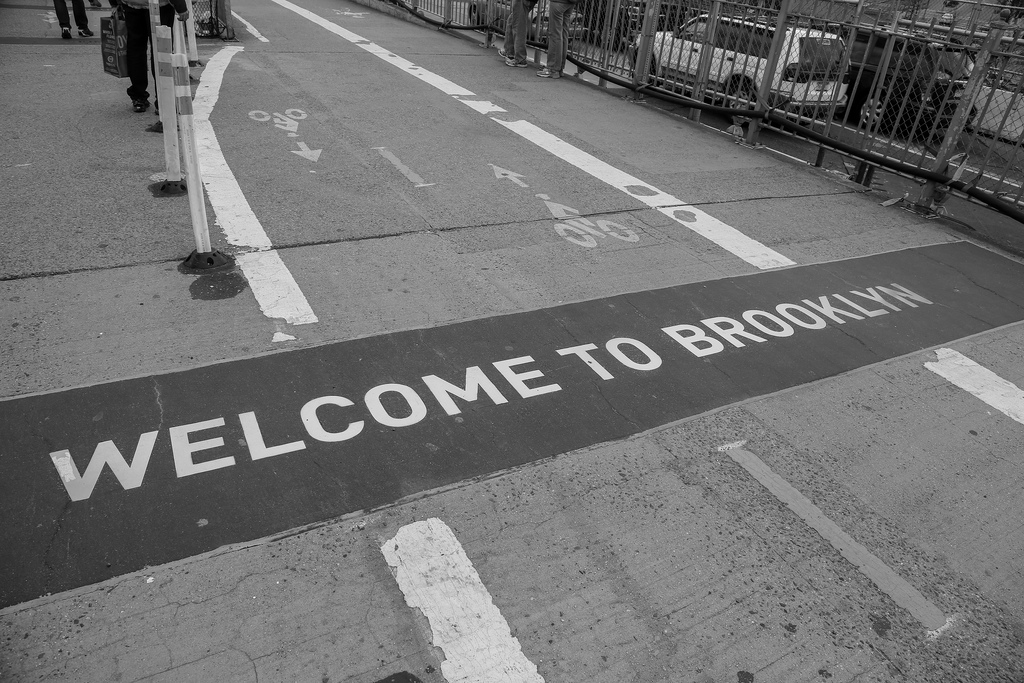 Dieandra was really into Dumbo. Dumbo is an acronym for down under the Manhattan Bridge overpass. It’s a becoming trendy neighborhood just over the Brooklyn Bridge. 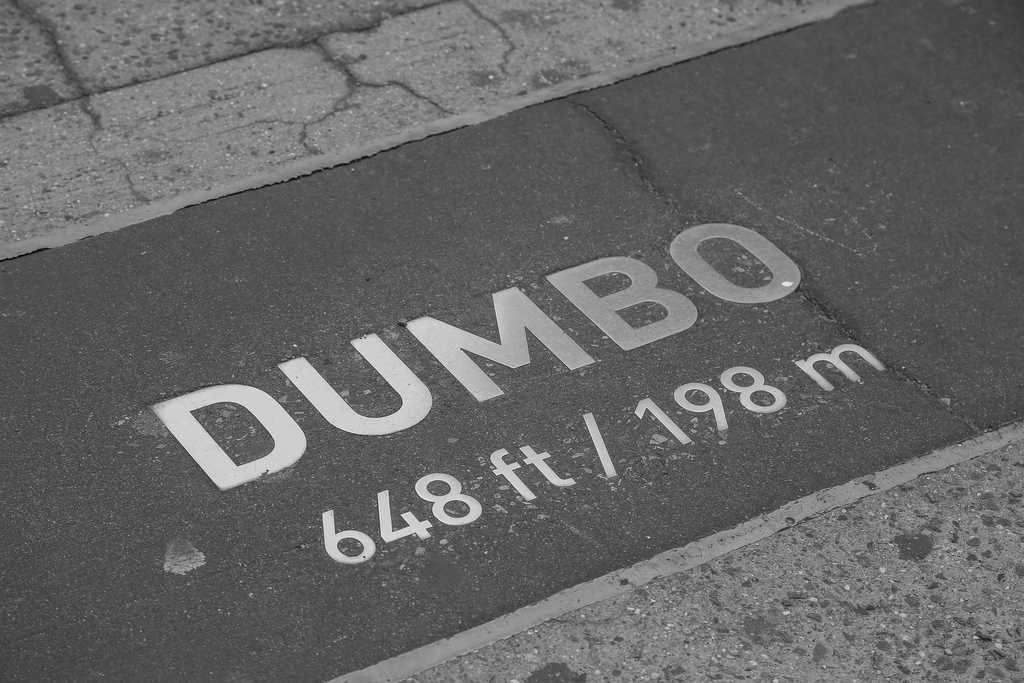 One of the things I really miss in San Francisco is brick. I’m guessing it’s due to earthquakes, but the bay area has very little brick compared to the East Coast. It’s nice to see some of the older brick buildings being recycled into contemporary housing for yuppies.

I meant for this post to be entirely in black and white. There were a couple of photos however, that really deserved to be in color.  We came upon this bicycle and I was experimenting with depth of field in the camera. It turned out really I liked how this photo came together.

We stopped to get some refreshments and the Dieandra introduced me to boxed water. Bottled water in a lot of ways is a complete waste of resources but boxed water alleviates some of the concerns as paper is so much easier product to recycle.

I have to say, this sticker really touched me. I saw it in a few different places. This particular one with the red heart and the red background caught my eye for more than a minute. It’s such a simple, but important message we need to all embrace. I was planning for this photo to be the only color one in the entire set but some of the others demanded to be in color as well. 🙂

Once in Dumbo, it was easy to get a closer photograph of the Brooklyn Bridge.

I was surprised how much water surrounded New York City. I guess I conceptually knew was always there but it is something else to be walking around and seeing all of the rivers in the city. I believe Chris had said there were 17 bridges in the New York City metro area.

The Manhattan Bridge was equally beautiful. It was much noisier to walk across as the train uses the bridge as well. Actually the train was definitely loud. From a distance though, it was pretty. In hindsight I would’ve walked over the Brooklyn Bridge twice. 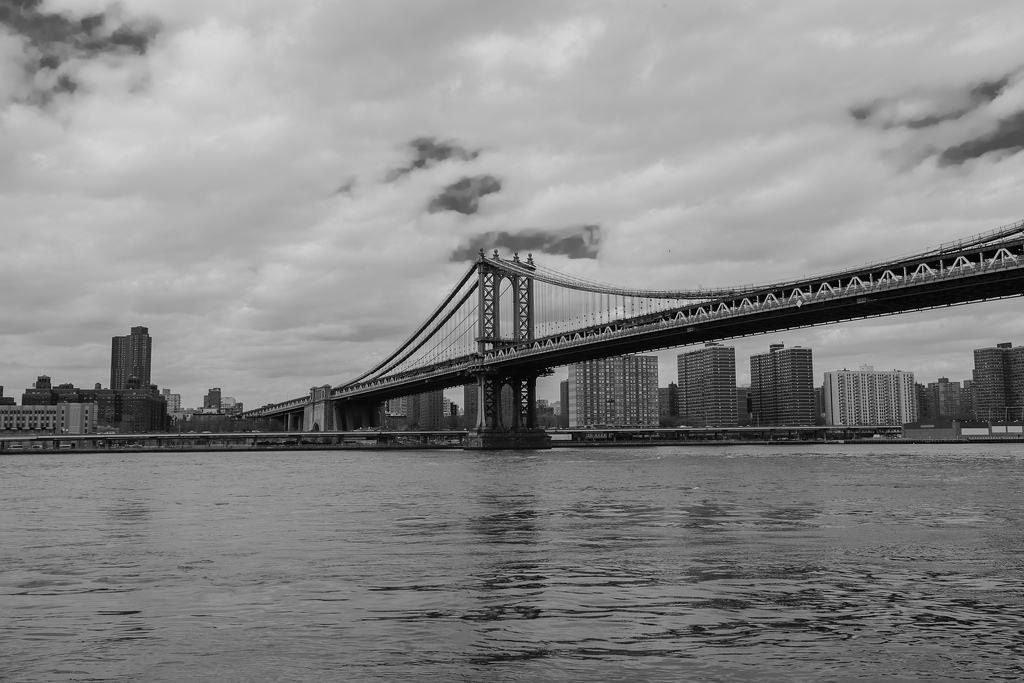 Walking over the Manhattan Bridge gives you a great view of New York City harbor. Unfortunately it wasn’t a beautiful sunny day but the cloud cover gave the city a more muted look.

Just before getting back into Manhattan the bridge flies over the FDR Drive.

There was an ad overlooking the bridge that definitely caught my eye. I appreciated the humor!

Once we all got back in the city, we spent some time shopping and exploring the area. Dieandra Took me over to the J.Crew in Manhattan to do a little bit of shopping. After that, Joe suggested I go for a real New York City haircut. Freeman’s Sporting Club was a true hit. It’s a barber in the truest sense of the term but the staff was much younger and the place had a yuppie but masculine feel to it. The haircut on all cost me about USD50. Some of that was New York City and the rest of it was the experience. If you’re in the area, I’d recommend it.

At this point the chill of the air was becoming cold. We hopped in the car and headed back to Jersey City for dinner. All in all a short day New York, but it was fun to get out and see the city.

One thought on “New York in Black and White”