I’ve not been back to Destin, Florida in over 20 years.  The last time I remember being there was as a high schooler on family vacation with my parents.  We were staying out near Sandestin which is about 10 miles east of the downtown.  I woke up early Sunday morning to go take photographs of the Destin Harbor as the sun came up.  I left San Destin about 5:45 and got into town at oh dark thirty.I could just see the beginning of light on the horizon.  Sunrise wasn’t for another half-hour.  This period of the morning is known as “begin civil twilight.” 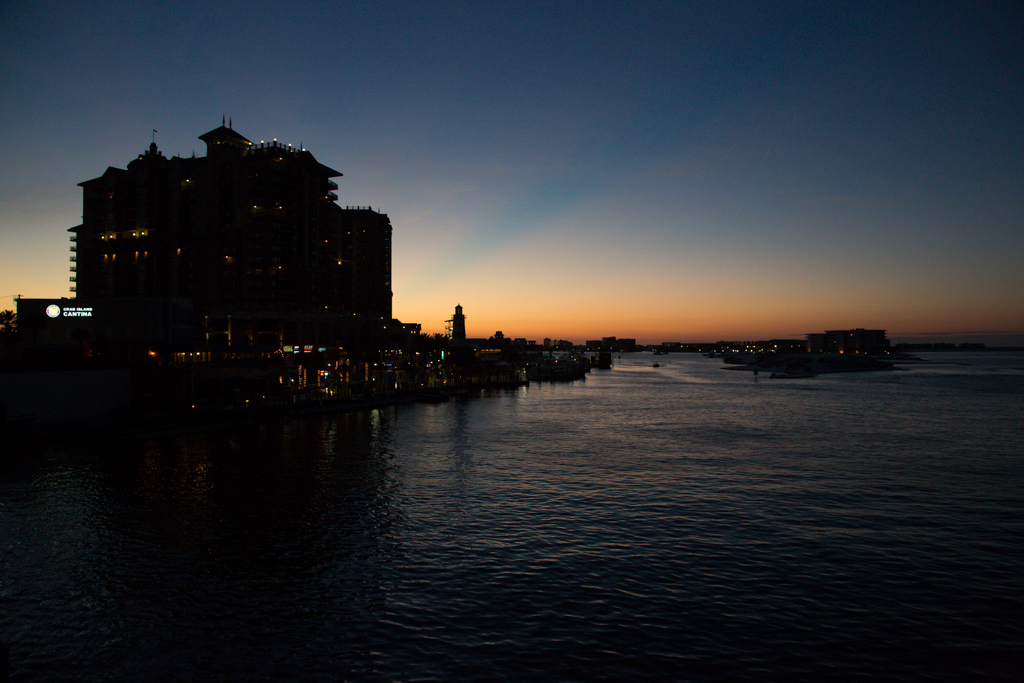 The fishing boats were pouring out of the harbor at first light.  Most of them were fully equipped with lights, but my hunch is most of the captains could navigate the harbor without lights.I never really understood why fishing with such an early man’s sport.  I’m guessing it’s because the fish are more active at dawn.  I would think this would be willing to eat all day though.  🙂 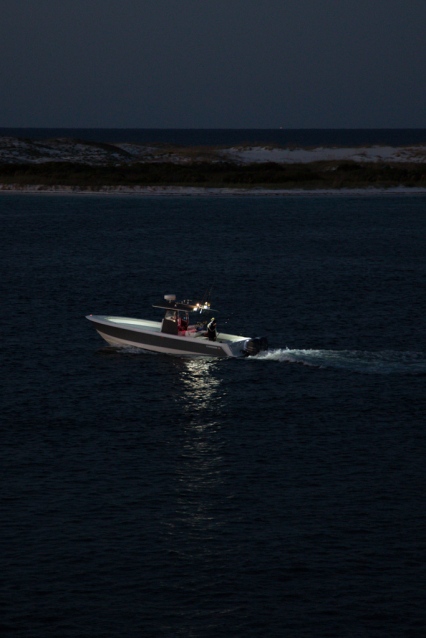 As a kid I can remember taking jet-skis through the harbor and making the left turn through East Pass and out to the Gulf of Mexico. This is one of my favorite pictures from the entire set.  I really love the warm colors from the sunrise in the background and the traffic and the Harbour heading out to sea.

The harbor is much more built up than it used to be.  There’s a massive condominium building (not in this picture) right near the bridge which is a bit of an eyesore.  The lighthouse on the water adds a nice touch, even if it’s not functional.The big boats appeared to be more comfortable out on the open seas.  I’ve never been in a boat larger than about 33 feet.  Even on the size of a boat, there was plenty of banging as we would roll over the surf. 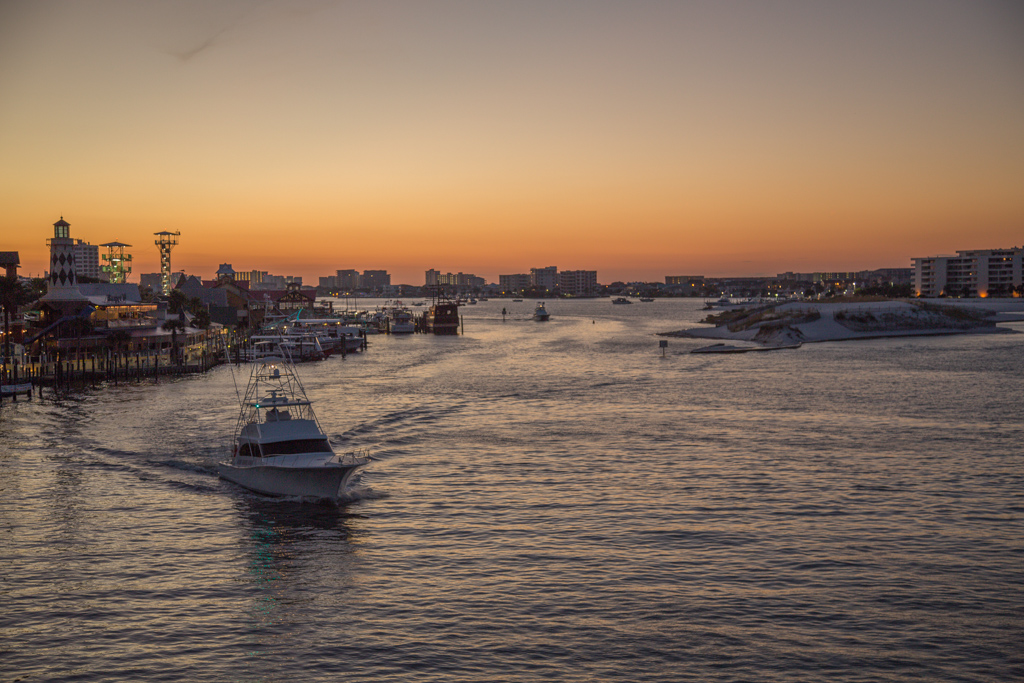 All of the slogans on the welcome sign haven’t changed in over 20 years. It’s still the luckiest fishing village and the (fishing) rodeo is in October.Technology does prevail.  The graphics are significantly better than they used to be.  As a kid after 6 hours in the car nothing would be a prettier sight than the welcome sign signaling vacation.  It also meant an end to “my side/your side” with my sister in the car. 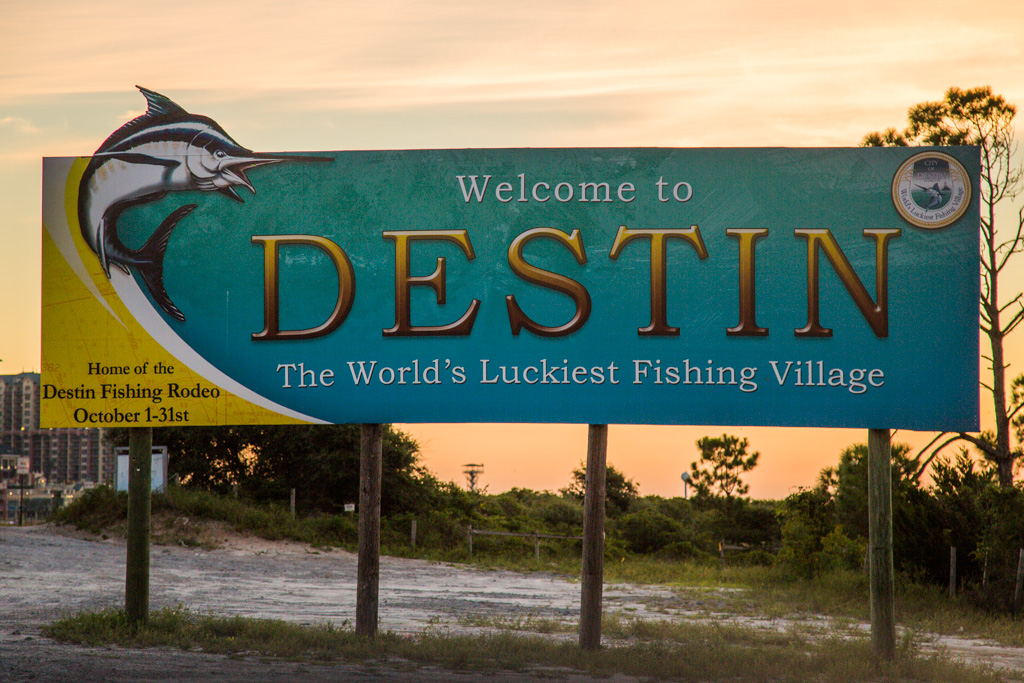 The sun came up just before 6:45 am and a prettier sight couldn’t have been had.  In fact, I’ve got it in panoramic format. If you click on the first one, and you can press the right arrow to page through the next 2.

I remember as a kid wandering the docks of the harbor looking for the boats that came from far away.  I’d also see if I understood the boat’s name. This one made me laugh as it’s a clear reference to the Zac Brown Band.Most of the boats were from Destin and Fort Walton Beach with an occasional craft as far away from Panama City Beach or Pensacola.  It was awesome to find the one boat from places truly far away like New Orleans, the Texas coast, or the opposite side of Florida.  Those from the Atlantic coast of Florida were likely trailered in, but we always gave them the benefit of the doubt. 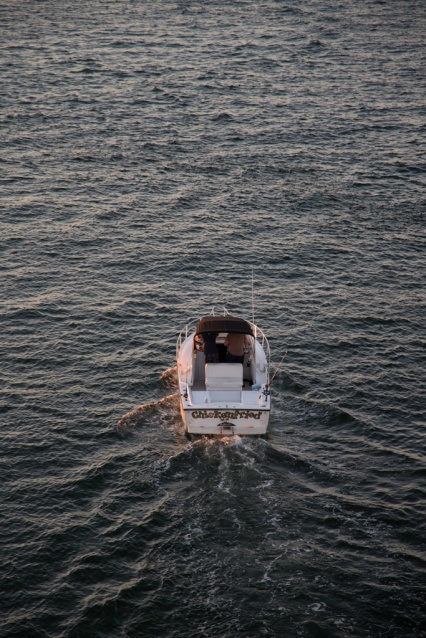 Boats streamed out of the harbor all morning much like a freeway commute.  The later it got in the morning the more recreational the boats looked though.This photograph is way over stylized, but I really do like the effect.  The minutes after sunrise have such a warm orange aura in them it’s wonderful to capture on camera.  Shooting straight into the sun I took some extra creative license and I think the photograph works. 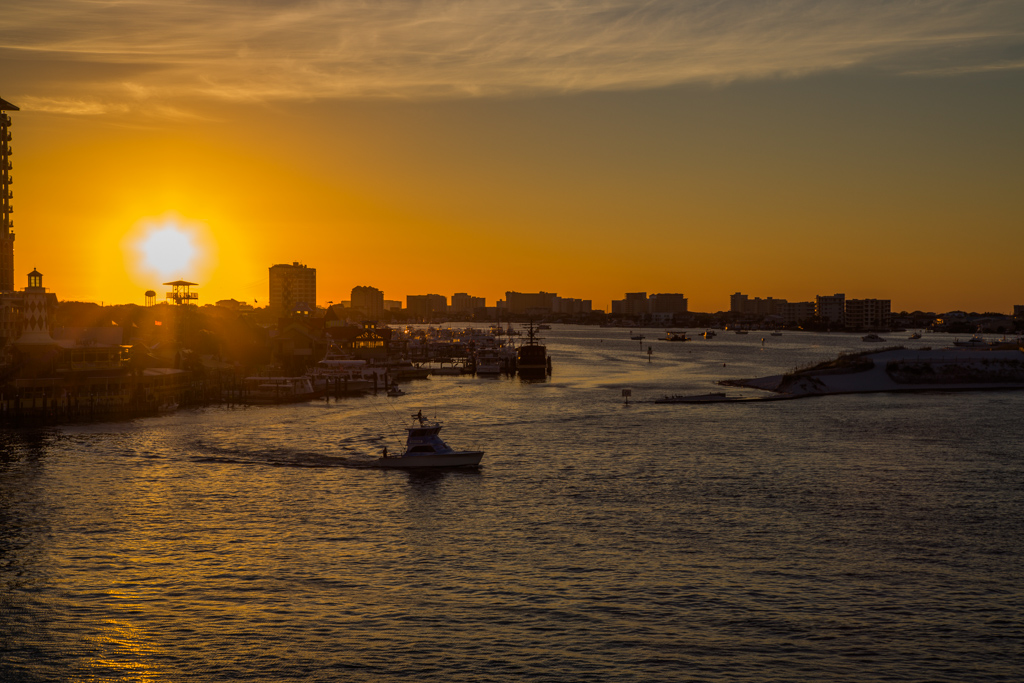 I always loved riding my bicycle over the bridge.  It surprises me to this day that only two of the San Francisco Bay Area bridges has a full bike path.

It was cool seeing the place we stayed has kids.  “Back in the day” the building was all a very flat gray.  I think the two tone definitely works.  Each spring break and each summer we come down here is a family and spend a week at the beach.  I was never really a big fan of the gritty nature of sand so I’d often wonder town after an hour or two on the beach. 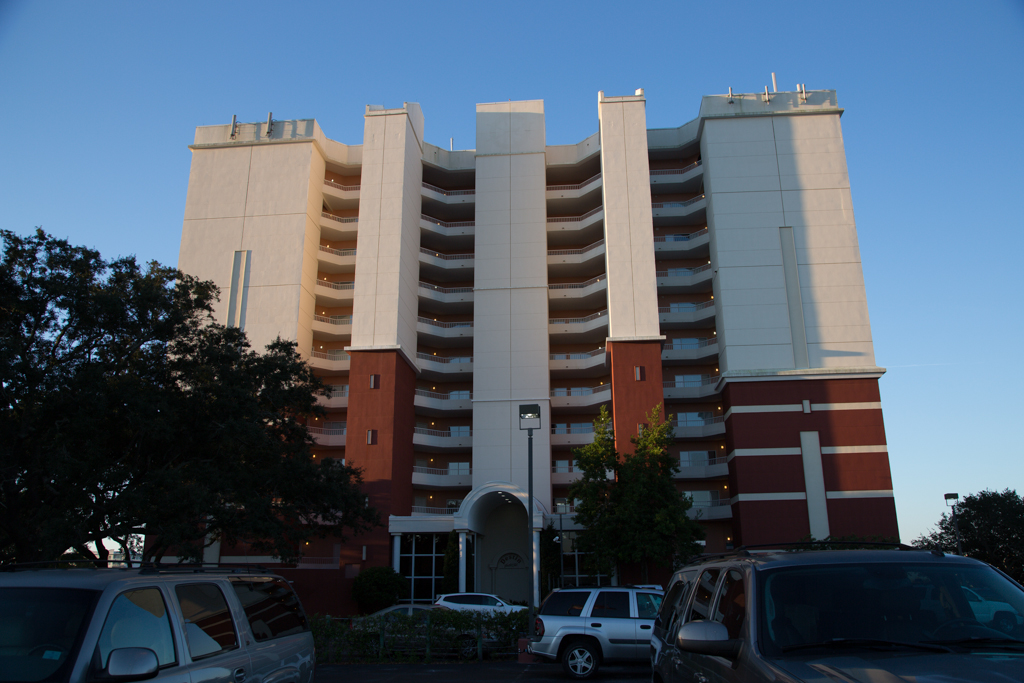 The Donut Hole is a Destin institution.  One morning during vacation my aunt and I would walk Down across town and pick out donuts for breakfast.  It was a tradition we probably did for 10 years.  The Donut Hole I remember having an amazing variety of donuts.  As a kid, my favorites were apple pie, Boston creme, and vanilla.  We didn’t make it this year, that’s probably okay. They’ve had the same slogan about key lime pies for at least 20 years.  Personally, I don’t think key lime pies are all that great.  If it keeps them in business, good on them. 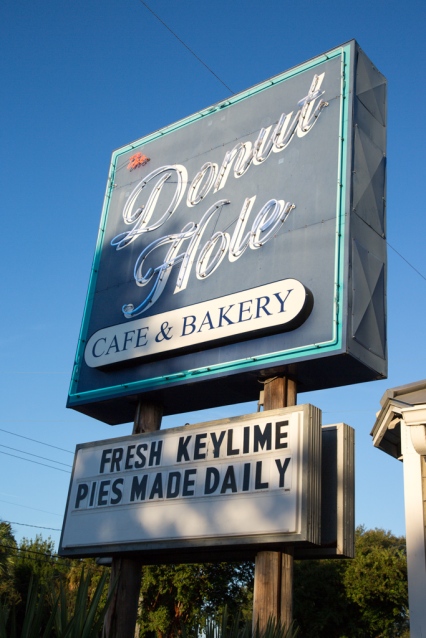 I snuck back out to the harbor to see it at sunset as well.  The “golden hours” are the hours surrounding sunrise and sunset.  The light during those times truly is the best light to photograph in.  Sunset cruises are big deals in this part of town.  Every so often as a family, we take a boat ride out at sunset to see the city from the water. 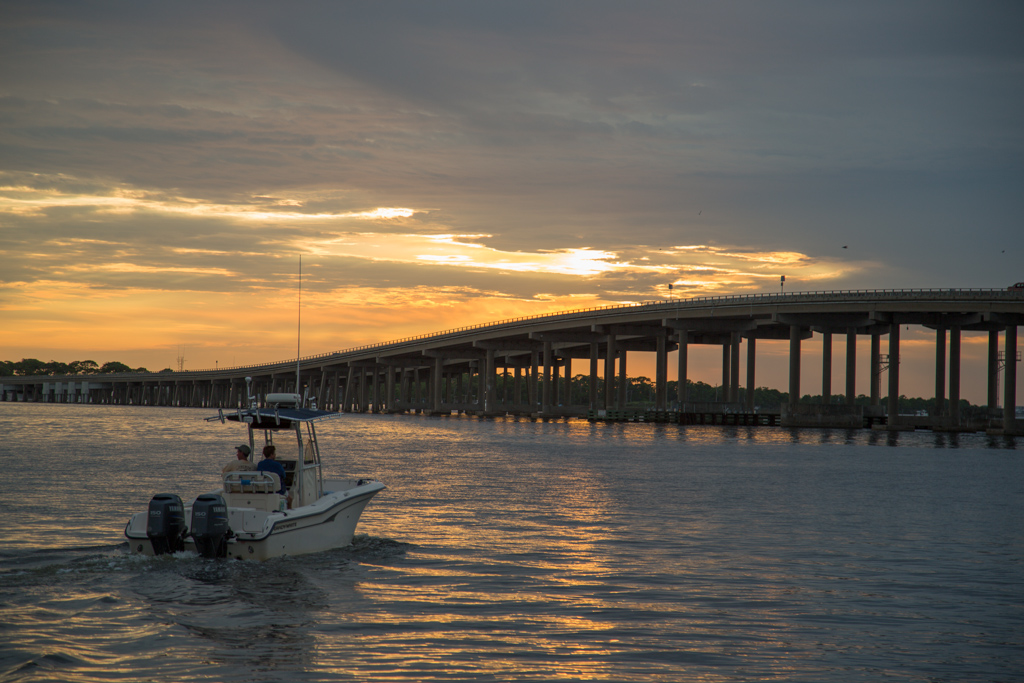 This machine definitely piqued my curiosity.  You could go into a telephone booth for the low price of $2 and experience a hurricane.  What you actually get?  You get wind coming out of the top at 78 miles an hour which is just barely a category one hurricane.  Looking at the video online, even small children can go into the machine which means it’s not even scary.  So effectively you’re paying $2 to sit in a hairdryer that blows room temperature air.  How this is successful I do not know. 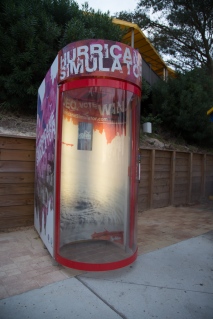 Even as an adult, it was fun to see all of the boats on the harbor.  I’m guessing some things never change.  I was never a huge fan of sailing but loved to walk on the docks and see the boats.  It would be fun to try it again being older as age brings new perspective on things. 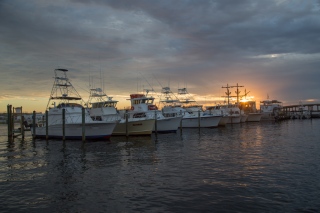 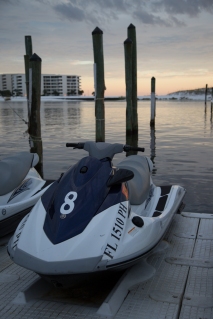 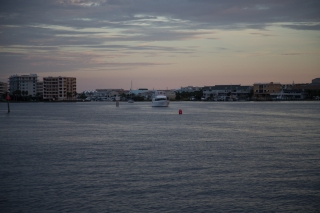 Gasoline spilling into the harbor has always been an issue.  I don’t have a great solution, but it seems like portable gas tanks aren’t a really great solution to fuel vehicles on the water.  Almost always some gasoline spills out and sheens across the water.  The BP oil spill is still an issue out at sea in these parts.  I didn’t see any effect of oil on the beaches though. 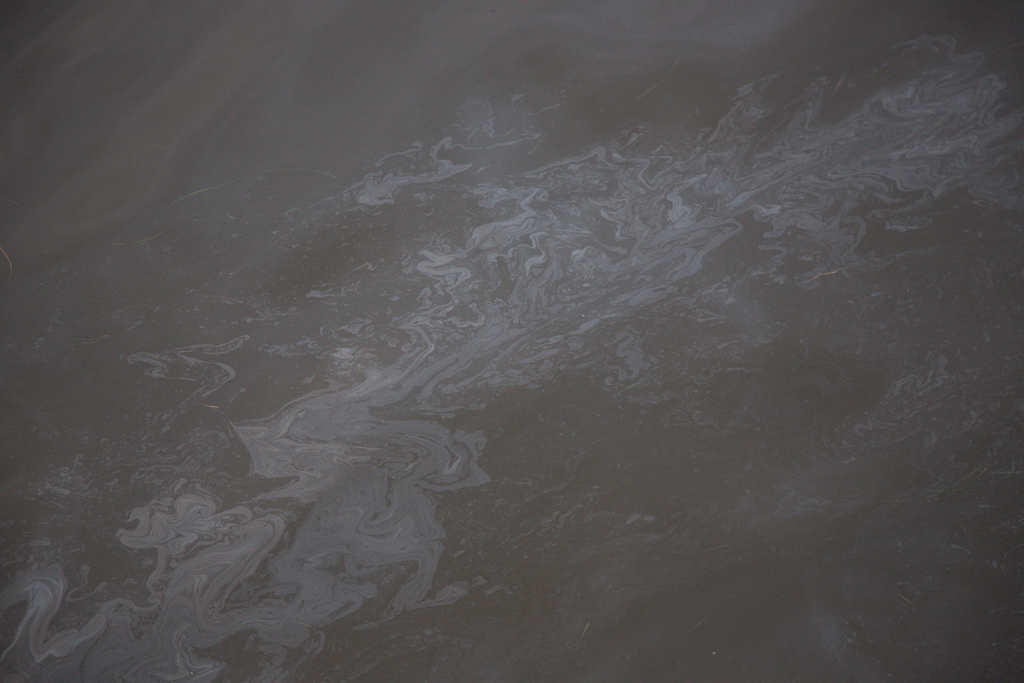 I’m definitely still working with this camera on photographing sunrises and sunsets.  With my point-and-shoot I could generally get good results with a minimum amount of effort.  The SLR definitely takes much more finesse.  I’m learning to work with high dynamic range (HDR) photography to capture more detail. HDR photographs involve multiple photographs at different exposures.  Software then says them together and pics the correctly expose pieces from each photograph and adds them to the final image. 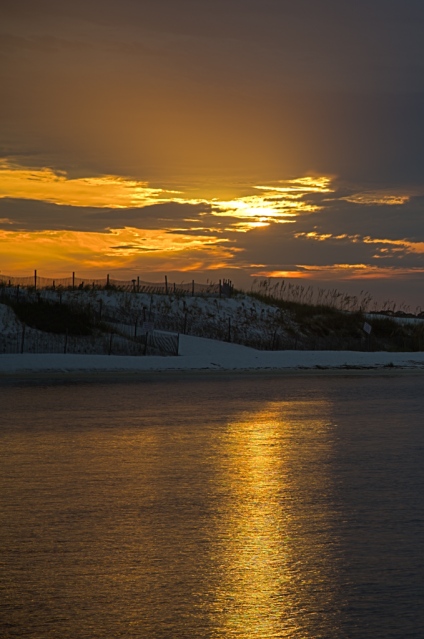 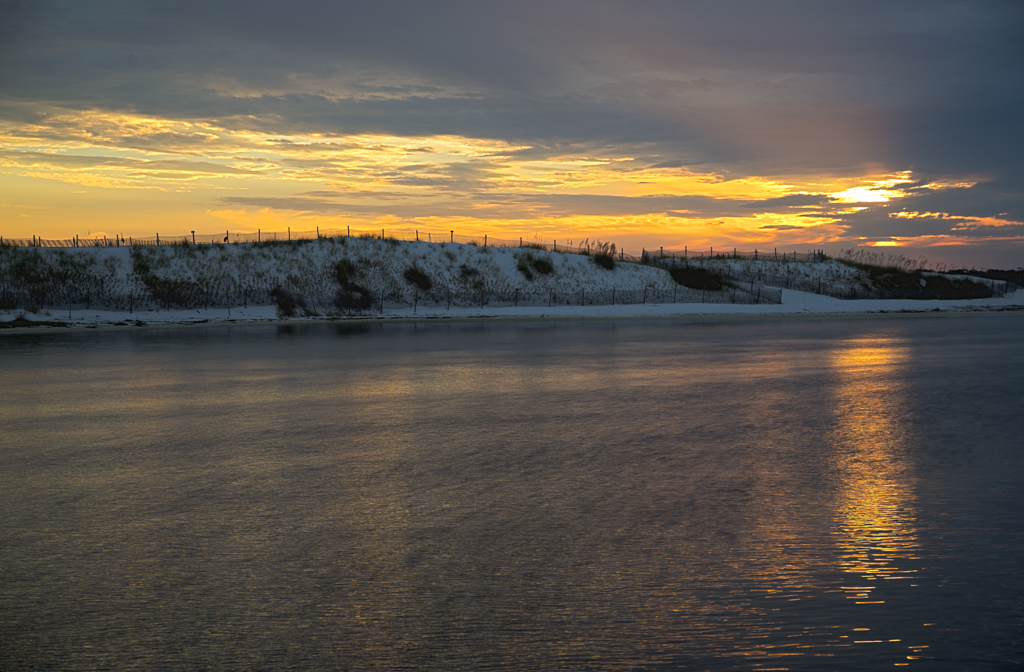 AJ’s and Harry T’swere always “the place to go” on the beach.  My sister was a little bit older than I was so she was able to go in and I had to find other plans.  Now being well over 21 it doesn’t have near the appeal it did some 15 years ago.  The new Harry T’s isn’t as cool as the old one, but I think that’s more nostalgia than the actual place. 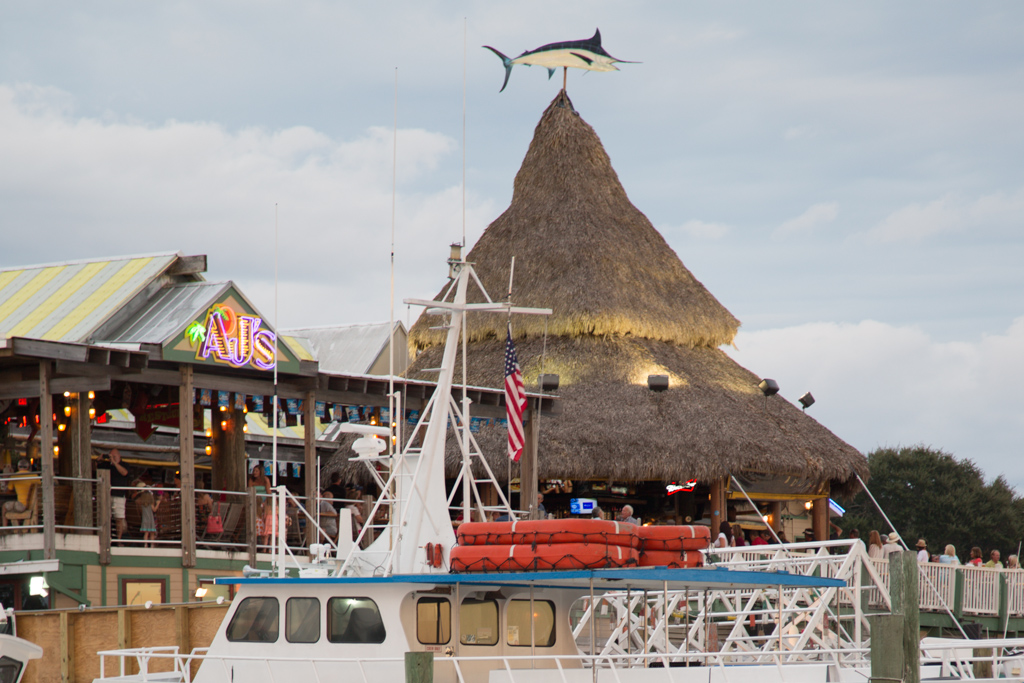 The last morning we were in town rain came in.  I didn’t intend to wake up early, but poked my eye out the window when I did.  Though I couldn’t see the sun, the sunrise was truly spectacular.  The clouds the cover the sky scattered the light even before the sun was actually up.  Once the sun came up, just about all the color vanished from the sky.  That’s what’s weird about sunrises.  You have to be there before the sun comes up and spend time after the sun is up.  Every sunrise is unique and you never know what you’ll find much you wait around to see it.

I never thought about taking a photograph of a sunrise in black and white.  I really like how this one came out though.  Combining shades of red, orange, and yellow really bring out the light in the sky. 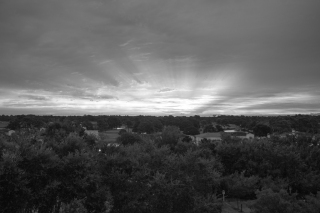 But alas, even the best trips have to end.  It was great taking a stroll down memory lane.  In some ways Destin has changed, but in a lot of ways it’s very much the same.  Hopefully I’ll get back there one day as 3 days was just not enough time.

One thought on “Photographing East Pass”