Man time passes quickly. It didn’t seem that long ago that I wrote the article “Dad is 62.” This year was the big 70. My mom and sister had the idea to surprise him this year a few weeks before his birthday. The plan in his mind was to spend a weekend down in Destin with some friends. As a family we’ve not been down there for at least 20 years. My mom has noted over the years how it’s changed. I was really curious to see how it actually changed compared to how I thought it looked.

I’m getting used to taking red eye flights. After this year, the overnight has been beaten into me with trips to Asia, Australia, and many trips out to the east coast. The redeye to Atlanta now feels like it’s not long enough. Since it’s only four hours, you only sleep 3 hours. Going to New York or Boston gives another 60-90 minutes of shuteye. The connection in to Fort Walton was so short they didn’t even serve soft drinks. I think it was 45 mins from takeoff to touchdown. The pilot joked the longest part of the flight was the taxi to the runway in Atlanta.

I was the first to arrive in town at the “Northwest Regional Airport.” Having bumped around major airports most of my life, it’s nice to just walk off the plane and over to the taxi or two to exit. Lines? Non existent. My mom and dad arrived late in the day. They were planning on meeting some of their friends for drinks at the Hog’s Breath Saloon. My niece and nephew jumped out to surprise my dad . It was clear we got him! 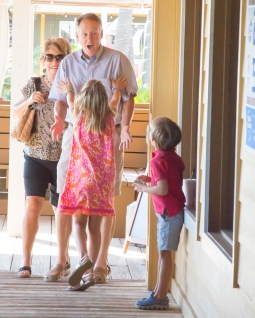 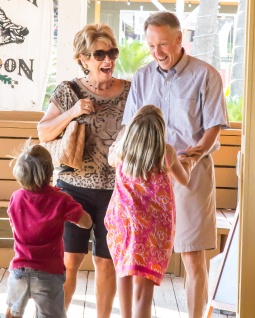 The my niece and nephew were spot on in being great surprisers.   My dad was totally surprised.  He had no idea.  My mom had to dodge a few bullets, but we hear she did so with grace! 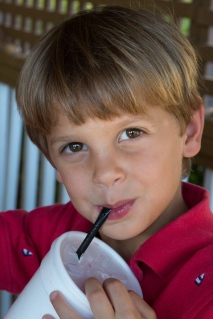 No trip to Destin would be complete without a stop at the beach. With all the recent rains, the typically emerald green water had a lot of seaweed in it, so the color was tarnished. The water was nice and warm though. It was a refreshing change in pace from our beaches here in California.

My sister and I took the kids out cycling in the morning. Kids have a totally different perspective on the world. When you connect with them, you begin to see the world as they do. We biked all over campus. We hiked on one of the nature trails to a secret swingset. We went through the tunnel to the beach and walked out on the docks to see the boats.

The bay side of Sandestin has totally changed from when I was a kid. I remember there being a fancy hotel or two back there but that was really it. Now they have a whole destination for kids called Baytowne Wharf. My niece really wanted to do the climbing maze. You walked up various rope bridges and planks to the top where you ring a bell. As soon as my nephew was on the bungee trampoline, the climbing maze lost all appeal for her. 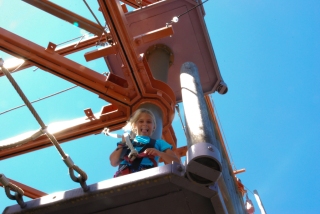 I didn’t want to stop climbing as I have a small fear of heights. Actually, it’s more the fear of falling than the fear of heights ☺. The whole structure was probably five stories high. It was satisfying to make it all the way to the bell.

My nephew really fell in love with the bungee jumping. He got pretty high on it. I’d guess 20 or so feet. For a five year old, that’s pretty awesome. I got a hold of my sister’s Nikon SLR camera and had as much fun as he did.

We ended the excursion to the wharf on a high note. They had a zip line crossing the exhibit that ran about 5 stories up. The kids were all over it. My sister volunteered to be the chaperone. We all thanked her. I was really wishing I had the 70-200 lens for this as the 70mm lens I had didn’t quite have enough reach to capture all of the detail of their faces. 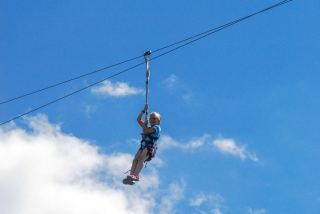 TIP: When retouching photos that have a lot of sky in them, Adobe Lightroom’s color adjustment can restore color to the skies by reducing blue lumanance. Reduce blue’s value a few points. -10 worked well for me.

My daredevil sister and dad after a ride on the high zip line!

My folks are avid golfers so on Sunday we all went out to go play golf.  I took lessons as a kid, but haven’t played in years (as in 25) with any regular cadence.  Some of the training came back to me which was awesome and it turned out I was a reasonable shot too!  I tended to finish each hole 3ish over par, which I was totally happy with as a beginner.  The weather was perfect and the golf course was empty. 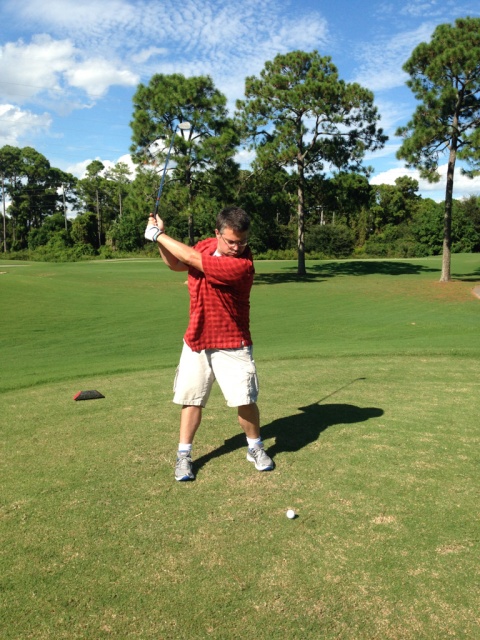 But alas, even the best of vacations have to come to a close.  I looked online and my flight out of Fort Walton was on time only 40% of the time.  Needless to say I missed my connection in Atlanta.  Fortunatley with a bit of wrangling, I was able to get a flight to another airport and get in that night.  Ironically I had the same seat going back that I did going out. Cheers to 20A!

One thought on “Sandestin”