Usually day two is the hardest for me on motorcycle trips. The first day is powered by adrenaline and the second day my body is being beaten into submission on the bike. Since my first day was only 50 kilometers I was wondering how today was going to go. The plan was to go back to Melbourne via the main route and then takes them back roads over Bright, Victoria. That would set me up well for a day through the mountains tomorrow. 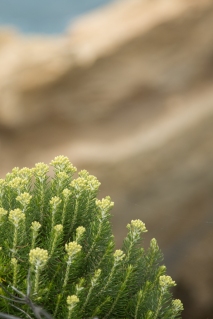 I really liked the town of Port Campbell. It’s sleepy, seaside manner reminded me a lot of Half Moon Bay. The weather was overcast and a little damp, just like the California coast. I decided to skip breakfast to get on the road. I know a number of riders that like to get 100 to 150 kilometers under their belt before a meal.

There were a number of geological features along the coast near Port Campbell. I wanted to go see the arch before leaving the coast. It to looked like an interesting spot.

I was really beginning to wonder if different road classifications in Australia meant anything. Was there a difference between A, B, C, and M roads. The Great Ocean Road was known as B100 so I’m guessing that some sort of secondary highway equivalent to the state highway back in the United States.

The arch was beautiful. The erosion of the sandstone along the coast has created wonderful geological features. The rock reminds me a lot of Death Valley. It’s got a lot of the bright beiges and subtle tones of orange, yellow, and red. The plants though are different from anything I’ve seen the United States. I’m not actually sure what species they are at all.

The first part of the day reminded me a lot of going through the gold country in California. There were wide open rolling hills covered with grass and trees dotting the landscape. The towns were small businesses the area here to be used for agriculture. The roads I was riding were also great for motorcycling: two lane, twisty, and no traffic. The overcast skies kept the heat down which was an added bonus. :-). I didn’t have a clue where I was going. I just kept following the big signs that said “Melboune”.

I rolled into the town of Colac about noon ready for lunch as I had skipped breakfast. Colac reminded me a lot of Iowa. John Deere, Kubota, and Stihl were main features in town. You could tell it was a working class agricultural town. I saw a Subway on the corner and decided I needed a little bit of America on the road. True to Australian form though, the cheese was different than you get in the United States. I defaulted for the nondescript “tasty” cheese that covers the Australian landscape. Tasty cheese is a lot like American cheese. It’s the default that I don’t think anybody really likes but accepts it as is always freely available. Either way, I was starving in the meatball sub was awesome. I think I was just starting though. 🙂

I got gas and Colac and ran into a couple touring on a Harley Davidson. As a marketer, Harvey Davidson fascinates me. This couple embodied the spirit of American Harley biker culture all the way in this distant land. In a lot of ways Harley-Davidson is a marketing organization that sells motorcycles to propagate an image and a “lifestyle.”

The road from Colac to Geelong was a mishmash of things: two lane, four lane, and everything in between. It started out deceptively entertaining. The rolling hills in the morning faded into valley country. The state of Victoria was updating the highway so there is lots of construction slowing traffic down to about 30 miles an hour. The light drizzle of the afternoon didn’t help either. A1 turned to M1 and the full fury of rush hour ensued. This was a holiday weekend and everyone had the same idea as me. Spend the weekend doing fun things and then jump on the freeway to come back to town. I burned a considerable amount of time just sitting in traffic. I was not a happy camper. 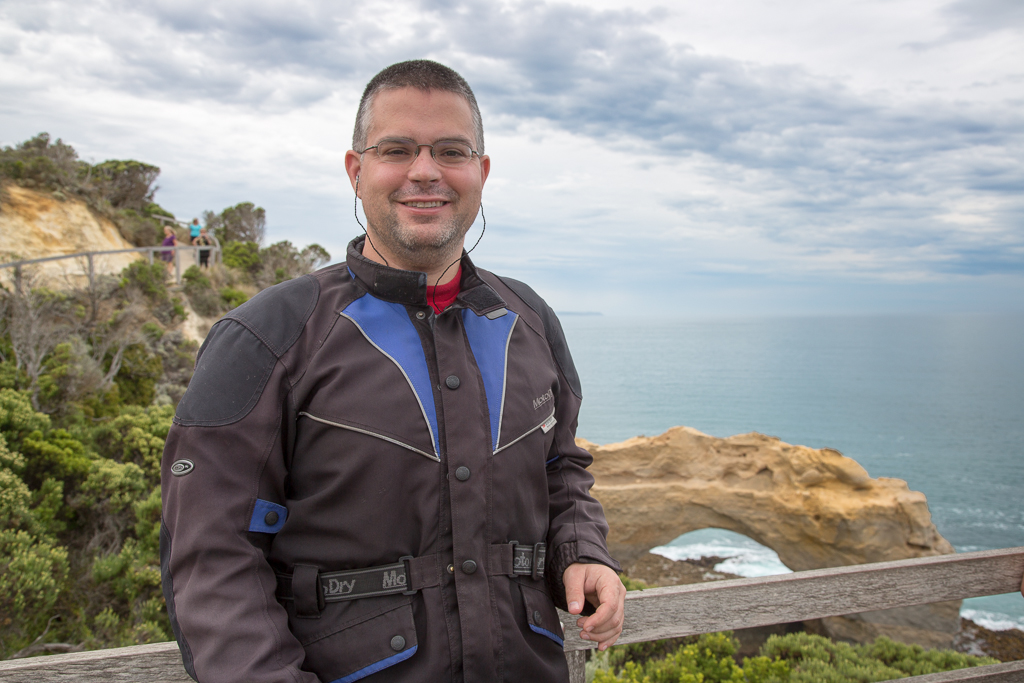 I stopped in the town of Seymour to stretch, get gas, and a little bit of nourishment to keep me going. Unlike the United States, it seems like the smaller towns are away from the freeway. I appeared to stumble into a truck stop that consisted of a gas station, a small convenience store, and truckies. Truckies is an Australian term for truck drivers.

I spent a lot of time thinking about religion. The word Hume has a number of connections to Christianity for me. Hume Lake is a huge Christian camp back in California near where I spent many summers at diabetes camp. A good friend of mine from church back in college was Gavin Hulme. Sure, there’s an extra l in his last name. I consider it close enough. I didn’t have any firm conclusions on the ride. I just know for me finding my place in spiritual matters is likely going to take another few years.

The speed cameras must be a great source of revenue for the state. Because the road is long, flat, and boring they sneak cameras in right when you think you’re in the clear. You’ll come around a small turn and bam! The camera is right there to get you. I wonder though being on a motorcycle how effective they are. I only have a license plate on the back and I slow the moment I see them. I’ll either get off undetected or I’ll have a massive pile of bills when I get home.

About 6:30 in the evening my whole world fell apart. I left my insulin back in Port Campbell. That was eight hours ago in the wrong direction. Everything would be closed. It was a public holiday. And I was completely in the middle of nowhere thousands of miles from home in a foreign country. Hell, Sydney was likely two days of riding away. I used all my strength to hold myself together. The evening here is the most isolating time as everyone I know in the United States is long asleep.

I was freaking out and telling myself that this would be okay. I would find a way through it and be a stronger man for it. Insulin is a medication that needs to be kept cold. I put it in the refrigerator last night and forgot to take it out when I was packing my bags in the morning. I am fortunate that I were an insulin pump that gives me a bit more margin than those on injections. That being said I need insulin to survive. It’s a moment by moment attachment to the drug that keeps me alive.

Given that things close at five in Sydney I knew nothing was going to be open. I headed to the hospital in Benalla to see what my options were. When I pulled up I saw that the parking lot was empty. My heart sank.  I saw the tradie working in the yard and he assured me that the hospital was open. Walking through dark hallway after dark hallway I finally saw a light. The records office was open!

After explaining my predicament at 100 kilometers an hour exasperated and unsure of my fate, the clerk let me know the hospital had no doctors. They could call one in but it would likely have cost me tons of money as I am uninsured here. Fortunately, just up the road 40 kilometers was Wangaratta. They had a staffed hospital that would be open on a public holiday. The clerk warned me that I would be last in line in the hospital would likely be overwhelmed.

I saddled up and rode the 40 kilometers to Wangaratta. I saw a pharmacy open and was elated! I hopped off the bike, ran to the pharmacist, and handed him my prescription from the States. To my disappointment he shrugged his shoulders and said he needed an Australian version of that document to dispense insulin. Back on the bike, I went to go find the hospital. 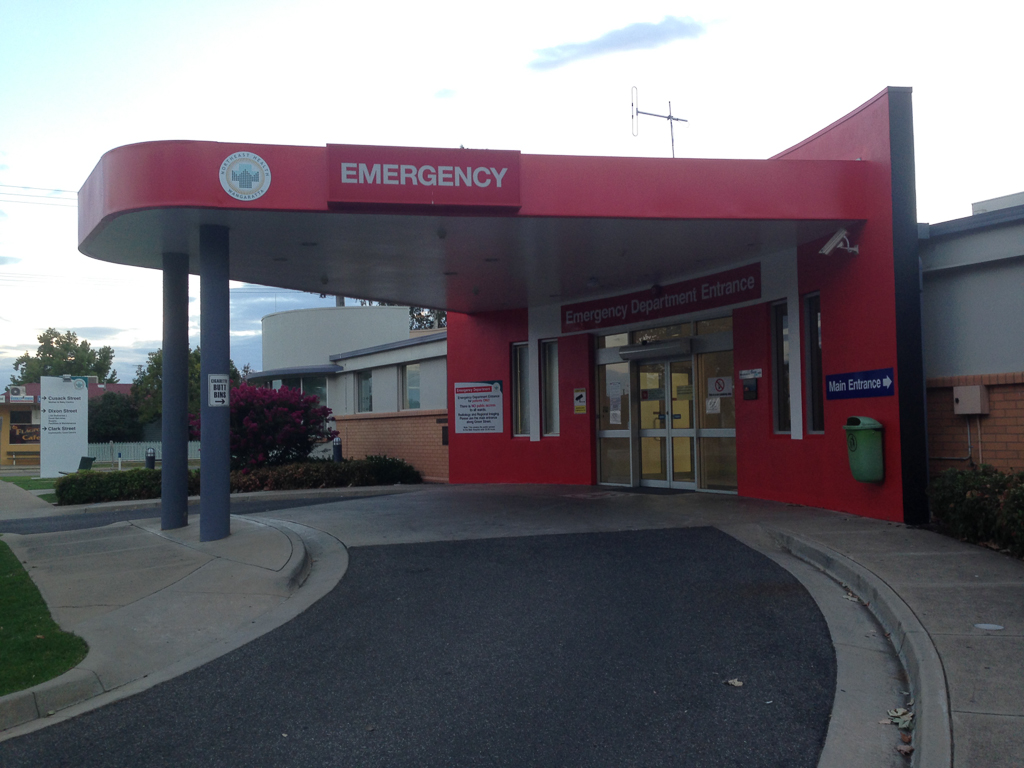 I explained my predicament again to the front office and they smiled and said they could help me. A good friend of mine works in rural healthcare tells me stories about Northern Exposure and I knew exactly what he meant when I walked in the hospital. Nobody was there and they saw me right away. I kept hearing “we’ll take care of you hun!”

The doctor, female and about 30 years old was super cool. I handed her my American prescriptions and she nodded acknowledging what any medical professional would know. I am diabetic. She got me the Australian prescriptions for insulin but let me know the hospital didn’t have any to give. Bummer. The chemist I saw earlier would now be closed in the nearest open one was 100 kilometers (60 miles) away at night I was too emotionally and physically exhausted to do the ride.

It was $140 for the doctor to look at me, acknowledge the obvious, and hand me a prescription. I didn’t care though. I was on my way to staying alive.
There were plenty of hotels to choose from in town. I found a good deal online at the Quality Inn. When I went to check in at the front desk, the clerk wanted to charge me $50 more. As I was turning around to leave the rate dropped back to what it was online. Oh the joys of being a tourist!

I didn’t have enough insulin for dinner that night. I needed to conserve what I had in case tomorrow turned out like today. It didn’t matter anyway. I walked into my room, laid on the bed, and I saw morning 10 hours later.

They say a bad day on the bike is better than a good day in the office. After today, I’m not so sure of that.

3 thoughts on “The Hume Highway: Port Campbell to Wangaratta”