When asking around at work what are the interesting things to do, the bridge climb came up a number of times. Having walked across the Golden Gate Bridge, I’ve often wondered what it would be like to actually be one of the guys who works on the bridge. I won’t say that I’m afraid of heights, but I’m not exactly cavalier in high places either.

My time is winding down in Sydney, so if I’m going to do it, I need to seize the day. A number of people remarked how expensive the bridge climb is. Looking on their website, I can see that it’s not cheap. Much like long-distance, but based on the time of day. Dawn was the most expensive at $348 whereas night was the cheapest at $198. I wanted to see the city at night as you could see the twinkling city lights all around.

Once I had my reservation in, I didn’t think about going up much. As the day got closer, a number of people reminded me how high in the air I would be. As I hopped on the bike to head over the butterflies in my stomach were definitely rolling around.

So what exactly have a signed myself up for? The Sydney Harbour Bridge connects the Sydney CBD (central business district, a.k.a. downtown) with North Sydney over a narrow part of Sydney Harbour. The bridge takes about 20 minutes to walk across, so I’m guessing it’s just over a mile wide. The bridge climb walks across the outer edge of the bridge to the summit, 134 m (440 feet) above the water’s surface below. In other words:

When I got to the starting point, we were greeted by our instructor who led our group to the top of the bridge. We all had to wear jumpsuits which contained anything that might fall from our persons down onto the roadway or into the water. Likewise, we were unable to bring anything with us. Cameras, cell phones, jewelry all had to stay at the bottom of the bridge. We had about 10 people in our group. Some were from Australia, many from Europe, in a few Americans. Eric, who worked for United Airlines, was based in San Francisco and here on holiday. Talk about finding the neighbor on the other side of the world.

Once who are strapped into our harnesses, they had a small version of the climb that contained all of the major elements we have to navigate through: ladders, tight spaces, and managing our connection with the bridge. Our harnesses had a small hook that stayed in contact with the cable the whole time we were out on the bridge. In theory, if we fell off we’d only fall 2 to 3 feet and we’d be caught by the cable before falling to the roadway or harbor below.

The adrenaline was fully pumping in my blood when I slipped my hook onto the cable committing myself to doing the climb. I was first in the group, behind our instructor as we headed off to climb. The first part of the bridge was fairly easy. We were on solid walkways as the BridgeClimb offices were built into the bridge itself.

A little further out, the solid walkway turned into a steel grate where we could see the harbor, some 33 m (100 feet) below. At this point the instructor told us a number of stories about people who had fallen off of the bridge and tumbled to their death or major dismemberment below. I have to admit, I wasn’t exactly feeling comfortable and decidedly trusting the technology that was supposedly keeping me safe. 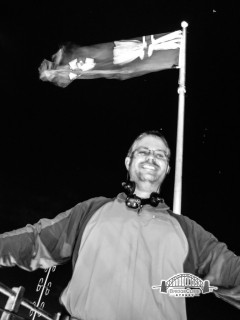 Next, we navigated agents ages one a series of ladders inside of the pylon. Other than being tight, this part of the climb is fairly easy. The inside of the pylon hides the height from you, so it’s just a matter of climbing the ladder. Thankfully, tight spaces don’t bother me so I appreciated the respite on the climb.

Once on top of the pylon, we were to walk across the arc of the bridge. The steel grate from before were now solid, opaque steel steps that were much easier to walk on. The view is simply stunning. The fact that I didn’t have my camera hurt. In a lot of ways, it was like riding a motorcycle. You had a 360° view of a truly epic place. It was just about sunset as we stepped on to the main part of the bridge leaving plenty of light to soak in the experience.

At this point in the climb, I was cruising. The bridge felt solid and I was totally enthused with the climb up. As the light waned, the city’s light filled in the gap and it was a spectacular view of everything below. When we got to the top, the height didn’t even bother me. It was cool being up at the top of the bridge seeing the giant Australian flag wave in the night. We had enough wind to flatter the flag but not so much that it made the climb difficult.

Our instructor told us a story that brought us back to the mid-1800s. Sydney Harbour is actually a very difficult harbor to navigate by boat. The Australian coastline is littered with shallow reefs that many ships have crashed and sunken due to poor navigation. This particular ship had many hundreds of people on it and only one survived. One of the townspeople apparently had a vivid dream the same night the ship crashed. Her persistence in looking for the ship saved the one life that survived the actual crash.

By the time we were walking down, I was fearless. It was an easy stroll on top of the world with beauty all around me. The evening’s chill was wrapping around all of us indicating autumn’s touch in Sydney.

Would I recommend it? Wholeheartedly! The thing I can’t figure out is that the night tour gives a unique and awesome perspective of the city. Why is it the cheapest tour of all? Either way, I’m a happy customer!