They (being folklore in the States) say everything in Australia tries to kill you. I’m not sure that’s fully true, but I will say there were some things that spooked me in this post.

Warning: If spiders creep you out, this post is not for you. 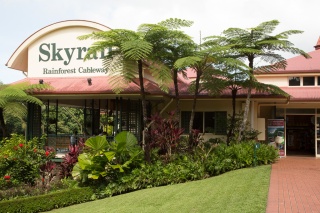 Because the bus left for the airport at 4 PM, we all had a fairly strict schedule to be on the sky rail at 2:30 PM. I was surprised how long the ride back to town would be. The sky realm is very much like a chairlift at a ski resort except the carriage was a gondola rather than a chair. I’ve never been on it chair lift ride that long. 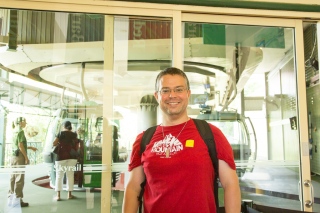 I didn’t see the family from Chicago my entire time in Kuranda. As I walked into the sky rail terminal, I saw their familiar faces and we instantly recounted our time in Kuranda. We ate at different restaurants and did different things, but both were pleasantly surprised at our time on top of the mountain. 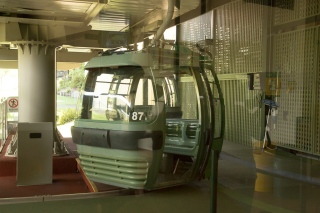 Linda was deathly afraid of heights and wasn’t all thrilled about the sky rail ride back down to Cairns. Her husband glibly said “you’ll be fine”, but I could tell she wasn’t looking forward to this experience in the slightest. I can hear my dad in the back of my mind saying “take the first step” in reference to downhill skiing. Once your skis tip over the ledge it’s never a scary as it is on top of the ledge. Linda just needed to get on the chairlift. We had two stops between Kuranda and Cairns: Barron Falls and Red Peak.

I kept reassuring Linda that the ride would be 100% safe. I mean, when was the last massive chairlift accident? I didn’t think there was one but Linda couldn’t prove me wrong. Anyways, if there was one just about every ski resort what has been sued out of existence due to a brittle technology. I was confident about the safety of the chairlift, but the skeptic in me always asks, “what if I’m the one?” 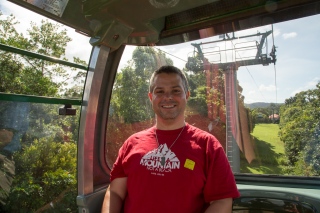 Once we boarded the cab and swooshed out of Kuranda Depot it was clear that this was going to be the superior ride home. The cab was a tight fit for six but a reasonably comfortable fit for four. The views were stunning all around and it was great to soak in the afternoon sun from the cab. Linda wasn’t enjoying the ride it all but I could tell she had an interest in my camera. Since distraction is an easy way to make someone feel more comfortable, we talked photography for a good 30 minutes to help ease her into the ride.

Barron Falls wasn’t near as impressive from the cable way as it was the railway. The steep cliffs and the deep gorges were not near as severe. I’m sure more water flowing over the falls would’ve made it more scenic but perspective made all the difference on this one.

It wasn’t clear where the stops were in the ride nor how long we could linger and still make the ride back to the airport. We took a quick look over the edge, took a few quick photographs, and then boarded the cab back to Cairns. 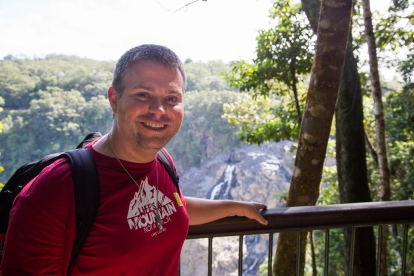 It still amazes me how different the vegetation is here versus the States. The topography of the landscape looks much like the Appalachian Mountains. None of the mountains have sharp peaks and tend to be in the 750 – 1250m in height. The foliage was thick everywhere you looked.

Upon arrival at Red Peak we all had to disembark from the sky rail much like we did at Barron Falls. One of the things that impresses me about the rain forest is how thick the canopies are. Very little light reaches the valley floor. 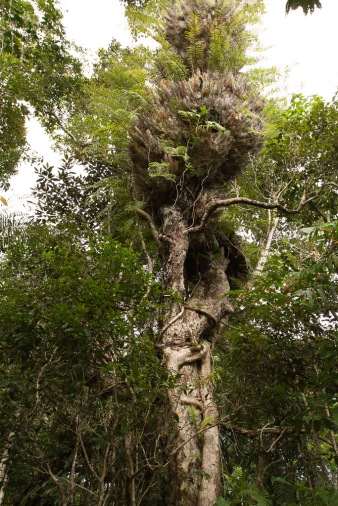 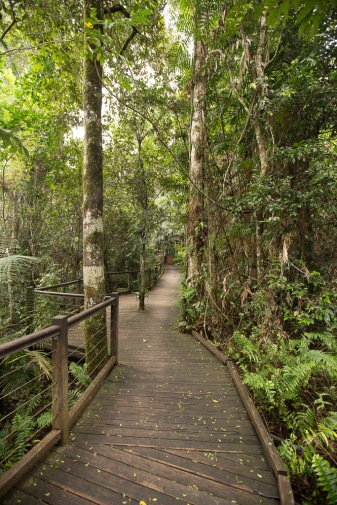 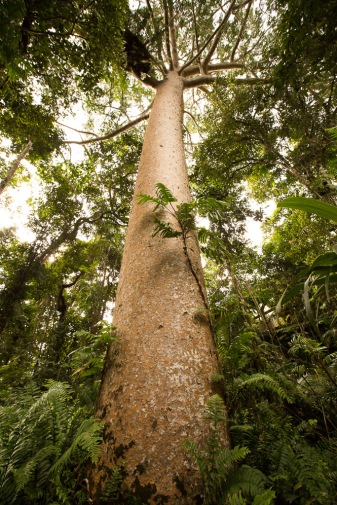 As we were walking back from the bathrooms, Linda pointed out a rather large spider that made its home right near the bathroom. I’ll be the first to say it, “I hate spiders!” This thing looked like something I really didn’t want to mess with.

As we boarded the sky rail, another one of these hungry spiders was right above us as we were waiting in line. The fact that the spider was right above my head and on the outside of its web, I was praying that gravity would not win in the spider would remain attached to its web rather than fall on top of my head!

The early nights indicating that winter was around the corner really started to set in. It wasn’t even 4 o’clock in the warm hues of the golden hour were beginning to set in as we headed down into Cairns. The whole area is a vibrant, tropical escape. 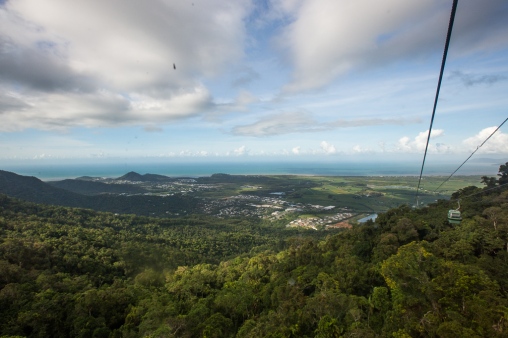 I thoroughly enjoyed my time on the sky rail. It was a perfect “most of the day activity” that worked well with my flight plan. It kept me from sitting in the hotel and airport or wandering around Cairns aimlessly.

I was bummed I didn’t get a group photo but then saw the tv screen so I snapped a final pic!