I spent a lot of time thinking on the Memorial Day Mingle when my last long motorcycle tour really was.  On that ride, a lightbulb went off that it was the Memorial Day Mingle last year.  A whole year had gone by without focused time in the Sierras with my motorcycle.  Because of that, I wanted to ride up to Lake Tahoe the following weekend and spend a couple of weekdays there coworking.  A coworking space is a shared office space of independent people working together.

Coworking: Exploring where to live

I’ve been experimenting and looking at different options of where to live.  My new job has some flexibility on location as I’m mostly customer focused and less fixed into one particular office.  My team is distributed throughout the globe and we’re looking for people in all different geographies.  I wanted to spend a couple of days up in Lake Tahoe to see the lake during the week rather than making the it just a weekend destination.

I also wanted to experience what work was like up in the mountains.  It’s one thing to vacation there.  Everything’s always wonderful on vacation.  It’s an entirely different thing to sit inside of the office and work in nature’s paradise.

I spent the day Sunday riding up to Reno, Nevada to hang out with my buddy Patrick.  It’s been a long time since we’ve seen one another, so it was great to connect and catch up on each other’s lives.  The high desert always affords beautiful sunsets looking back towards the Sierras.  I enjoy that about Reno.

In the Bay Area, Interstate 80 is a commuter’s worst nightmare.  It’s almost always a grind from the Central Valley all the way down to its end at at US Highway 101.  Things in Reno couldn’t have been more different.  In my hour-long commute from Reno to North Lake Tahoe, there was no traffic, a gentle breeze, and even some twisty roads on my way to the office.  There’s a coworking space, Tahoe Mill just outside of Alpine Meadows Ski Resort.  The office had fifteen or so desks, most of which were reserved for permanent coworkers.  The people in the office came from a variety of professions but the main focus areas were environmental activism, construction, geology – all of the fields relating to Earth sciences.  I was clearly the outlier in the group being in software.

I had lunch right outside Alpine Meadows which was awesome.  There’s something to be said for being at 7000 feet, having the sun on your back, and breathing in fresh mountain air.  It’s completely orthogonal to my life down in the Bay Area.  The restaurant was full of construction workers fixing a bridge over the Truckee River. Gone were the conversations on the latest app, social networking site, and who’s buying whom.

I hadn’t really seen major effects of California’s long ranging drought.  Looking down at the Truckee River, it was clear that we’re in trouble.  Usually this river has tons of people in it tubing.  Not only were there no people, there was barely any water.  To say the river was trickling was an understatement. 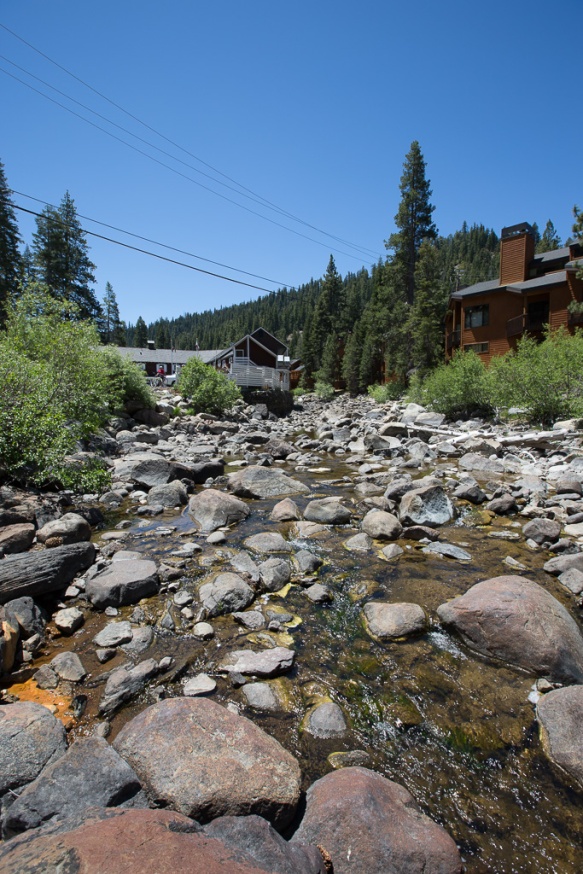 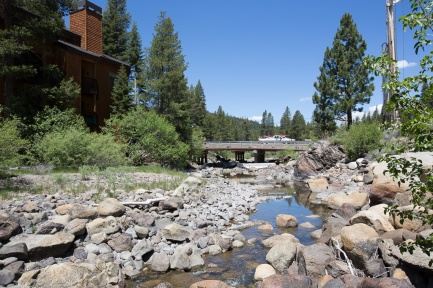 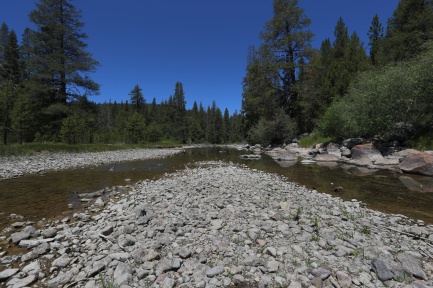 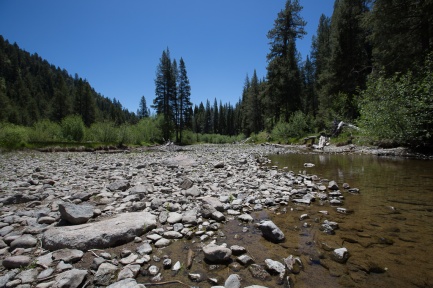 My evening commute was every bit as wonderful as my morning commute.  I rode down Highway 89 caressing Lake Tahoe’s western shore.  One thing that was surprising was how much construction was going on.  They say in cold weather climates there are two seasons: winter and road construction.  Since I really only spent time in Lake Tahoe on the weekends, most of the construction wasn’t there.  There were four of one lane road sections that really extended the travel time for those in cars.  Fortunately motorcycles can lane split up to the front of the line making travel significantly faster.

South Lake Tahoe wasn’t nearly as packed on a Monday night as I typically know it.  Sure, there was a flow of tourist traffic coming and going but the influx of Bay Area tourists was not there.  Restaurants were easier to get into, and the sidewalks weren’t near as crammed.

I’ve worked in technology my whole career.  There’s a lot to be said working amongst people who are in similar professions.  You learn from each other, you work in a team focused on a single goal.  You network with people amongst your industry.  There are opportunities to learn one another’s skill sets.  A coworking space is different.  You don’t have the community aspect that comes from working at the same company.

Coworking is all about sharing.  You learn what other people do.  They can bring different perspectives into your work.  In two offices over two days I was the only software guy.  Much like traditional offices, you overhear conversations all day long.  The differences all the conversations are very different.  You learn things from different people.  I didn’t understand how structural engineering was different in the mountains than it was down in the Sacramento Valley.  I wasn’t familiar with how one environmental engineer was doing research about aquatic wildlife in Lake Tahoe.  There’s always a flow of people in and out of a coworking space was very different knowledge and experiences than you do.  That was very powerful.

Usually weekend trips on a motorcycle involve a long, grueling Sunday evening commute down the mountain.  I, along with tens of thousands of other lemmings are making the pilgrimage back to the Bay Area.  Today was different.  It was Tuesday.  Nobody was heading from Lake Tahoe back to the bay area.  About 4 o’clock I could see some clouds brewing to the West indicating rain was coming soon.  I packed up my desk, thanked everybody for sharing their day with me, and hit the road.

Other than signs of impending rain, the ride home was beautiful.  Most of the way down US 50 I followed a Toyota Scion down the mountain. The Scion knew his way along the road as the suspension elegantly compressed and released through each turn at speed.  We were running at a pretty good clip and we didn’t have to pass a single car.  In other words – 60 miles of truly great motorcycling.

I had Sacramento at 6 PM and took the opportunity to hang out with my buddy John in the area.  For all the time I’ve spent in California, Sacramento has never been on my tour list.  Most of my touring to date has been by motorcycle, and Sacramento isn’t exactly a motorcyclist’s paradise.  It was a surprisingly cool summer evening so John and I headed over to the state capitol after dinner. 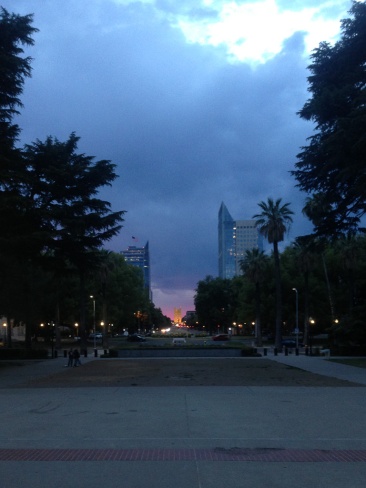 The state capitol is impressive to say the least.  The grounds are wonderfully maintained (even in this drought) and the building is well lit up at night.  I didn’t think to bring my SLR camera – and I regretted it.  iPhone cameras just don’t do it justice.

I caught the morning news and one thing was clear – rain was coming and I missed the signs from last night in the photo on the right.  Yes, we’re in a drought.  Yes, I’m thankful for the rain.  Can it wait a couple of hours?  Unfortunately it couldn’t in the ride down Interstate 80 from Sacramento to San Francisco was a soaker.  By the time I got to Walnut Creek, you could hear squish, squish, squish in my boots.  It was a full day at work that day and I’m glad we had hot showers to restore a wet soul.  But alas, I remember just about any day on the bike is better than that same day in the car.  🙂

One thought on “Coworking in Lake Tahoe”