I’ve been flying with Delta Air Lines forever. Having grown up in the southeast they were the hometown airline. When going on vacation in the summer and at Christmas, we’d fly Delta.  I got my first SkyMiles account when I was about 6.  Other than my social security number, it’s the longest lasting string of numbers that identifies me.

Many years later I landed a job in marketing.  That job required extensive travel.  As the team was forming, the new manager asked each of us to find a company whose marketing we admire.  I came to really love Delta’s 2014 Super Bowl ad, “Up”:

Each time I watch the ad I see something new. They emphasize the brand well, bring the viewer back to focus on premium services like Sky Club and luxury seating, and the direction of the video always goes up.  They truly are in the business of up.

Additionally, Delta has a strong record of supporting the LGBT community which is an added bonus given their home base in Atlanta which is traditionally a more conservative place to do business. Delta routinely scores well on the HRC workplace the quality index. Delta stands against many of the religious freedom laws that the legislature tries to pass.  When I was traveling regularly for work I got to know a couple of the LGBT flight attendants who vouch that Delta is a great place to work.

Once I moved out to the West Coast, flying with Delta to places other than their hubs became harder. Flying home was always easy.  It’s a direct hop to Atlanta. One the travel for the marketing job kicked in, I was going to many, many different places.  From San Francisco, almost every flight requires a connection. The first year to gain status was painful (as it is on any airline).  As a Platinum SkyMiles member, not being in a hub city was actually an advantage. I get upgraded on just about every leg as I’m generally not competing with Diamond Medallion members – which are abundant in Atlanta and other hub cities.

Delta and I had a complicated relationship which required multiple handoffs from both of us to stay together, but the whole was usually greater than the sum of its parts. A few years ago I transferred into another job which didn’t require regular travel. The following year I lost the coveted Platinum Medallion status and became a regular human being again who starts in the back of the line.

Travel was very different once I lost status.  I was no longer Mr. Radigan.  I was “the back of the line is over there.” My first complex travel segment after losing status was from San Francisco to Orlando. Delta doesn’t offer direct service between those two cities so a layover in Los Angeles or Atlanta was inevitable. To make matters worse, it rained that day in San Francisco which wreaks havoc on air travel – especially the first major rain of the season. The first leg of my flight got delayed which meant I wasn’t going to make the second. I called the airline and pushed to get rebooked (against Delta’s will) as my requirement was not to get stranded overnight in a connecting city. I’d rather wait it out at home in San Francisco. The second flight out of San Francisco got delayed. The third flight suffered the same fate. By my fourth rebooking, I had to get to Orlando. Even if it meant getting stranded somewhere in the middle.

Because I got bumped so many times, Delta offered to upgrade me to first class for the flight. Major kudos to them. When I got to the airport, it was clear my 7pm flight was going to be delayed and I’d miss my connection in Los Angeles. I saw the 5:30 pm flight to Los Angeles boarding, so I walked over to get in line to speak with the gate agent. The person ahead of me was screaming at full volume as the gate agent denied boarding for them. I didn’t know why that was the case but I figured my chances were slim in getting on that flight.

When the gate agent asked me what I needed I told him my story of getting bumped four times and that if he had any open seat I would be grateful. Apparently 13 F became free. I hopped on the flight and had a relatively uneventful flight to Orlando. My bags didn’t make the flight and Delta dutifully drove them out to my hotel (at their expense).

On the way home, I was to fly from Orlando to Atlanta and spend a few days in Atlanta. Then I’d fly from Atlanta back to San Francisco. Once I got to the airport I realized I had left something medically necessary back at the hotel. That’s clearly my bad.

When explaining this to Delta, my only apparent option was to pay a $200 change fee plus any additional adjustment in fare. That amount turned out to be about $400. Because I was traveling with work I also checked in with our corporate travel and for them to do the same operation was about $800. When I looked on Delta’s website a full fare ticket was about $85 when I asked the representative on the phone if I could just buy a full fare ticket between Orlando and Atlanta she said they would cancel my flight from Atlanta to San Francisco which was scheduled a few days later. The reason? I didn’t fly on that ticket from Orlando to Atlanta. Thus, all future destinations get canceled.

In short, I didn’t understand why Delta was making my life so difficult. What have I learned through this headache?  Customers are agile too.  We change over time and we need to understand that as we make product choices.

As product owners, we make personas to model customers and the market we serve. Generally, each persona reflects a type of customer your product targets. For example, an airline may use a few different personas to help with product development: a frequent business traveler, a parent with kids who travels on holidays, the last minute emergency traveler, etc.

At the beginning of my relationship with Delta I flew a few times a year between major hubs. I was predictable as I’d travel during the summer and the winter holidays and didn’t have much the hassle that comes from connecting flights.  Let’s call me customer 1.

After I moved into marketing, a lot of my life had changed. I moved from a hub city to a spoke city. Every flight was a connection. Passengers with connections require more from the airline. Delays become more painful. Scheduling becomes more painful. The customer’s experience with the airline deteriorates as it’s just harder to do business – no matter how good the airline is. As a frequent business traveler I was a more profitable customer for the airline even though it took more work to generate profit from me. My evolution with Delta was positive for Delta. Gaining status with the airline indicates the airline’s desire to keep me as a customer. I move up profitability curve and represented as customer 2.

When I transferred out of marketing my travel patterns mimicked customer 1, but with all of the hassles of servicing customer 2. Now, I fly less and get more expensive to serve per flight. This makes me a more difficult customer to serve and generate profit from for the airline. 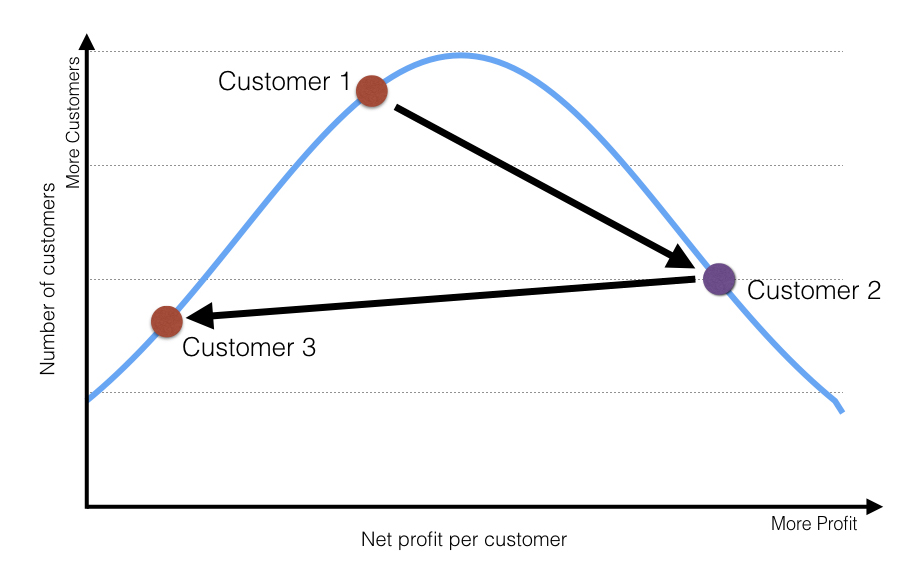 The two questions that pop into my mind are:

Flying United I move up the profitability as I’m a simpler customer to service.

I grew up in a culture where the customer was always right. Companies should go to all ends to make customers happy. The chart would indicate there’s a certain point where customers no longer become addressable customers as they are too expensive to service and not worth the company’s time.

Is it okay for a company to terminate its relationship with the customer as they become too expensive to service?

Thoughts? Let me know in the comments!